Modernisation began with the age of industrialisation in Europe. Factories came up quickly, generating large-scale production of goods and this led to the worldwide trade. New inventions and innovation in technology accelerated this process. European nations expanded their colonies and modernization also reached there. Let us see how it came about in Europe, how it expanded and how it also reached India.

Before The Scene Blew Up

‘Proto- Industrialisation’ was the phase before Industrial Revolution occurred in Europe. There was large scale production happening even then, but not in factories! Can you imagine how? There was a system where the rural masses produced raw material and sold it to the merchant class.

Then, the merchants would sell that raw material to a craftsman and make his process into the final product. Merchants would then buy the goods and sell it in the market. This mercantile system could no longer survive as the urban guilds were very strong and they monopolized production and selling of goods.

The Coming of Factories More colonies for the imperialists meant more raw material at cheap prices, plus a market to dump goods into. Factories started coming about rapidly with inventions of machinery, like the mill invented by Richard Arkwright. The most widely produced item was cotton. The raw material came for cheap from the colonies of India and America. Places like Lancashire and Manchester became hubs of factory production. However, food processing, glassware, pottery, tanning, etc., were produced traditionally.

Factories with machinery depended on manual labour to operate. Many of the labour came from villages where they had lost their livelihood as artisans and producers. They lived in harsh condition, sleeping on pavements on roadsides and even the demand for them was only seasonal. However, hand-made goods were in great demand, as they symbolized class and elegance.

With the coming of more inventions like the ‘Spinning Jenny’ by Hargreaves, the labourers started getting lower wages and unemployed too. They came to hate the machines and even started to attack and destroy them. However, this conflict didn’t last long as the machines led to the building of roads and railways where people were further employed! 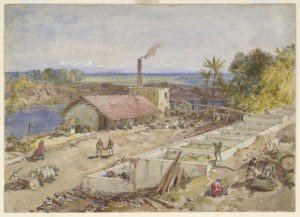 India was a rich country with an external and internal trade. However, with the coming of imperialism and colonialism, the economy of the country began to dwindle. This happened due to the Britisher’s trade measures like exploiting raw materials, ‘free trade’ and high customs duties for their Indian goods. They took raw materials from India to trade to Europe for a very cheap price (example, cotton), processed it into finer goods (example, cloth) in Britain and then sold it back at very high prices in India.

Earlier, weavers would auction their goods to the best buyer, but after the British controlled the economy, they became the buyers. The new buyers treated the weavers badly, demanded very high amounts of goods and even beat them up. Slowly, factory-made goods which were cheaper to make (from places like Manchester and Lancashire) eroded the weavers and industries in India.

Indian industries and weavers slowly died and port cities like Bombay and Calcutta came up due to overseas trade. Yet, there were few men like Dwarkanath Tagore, J. Nusserwanji, etc. who carried out businesses across Central and South Asian networks.

Q: What is the Spinning Jenny?

Ans: Spinning Jenny was a simple machine invented during the 1770’s that completely revolutionized the weaving industry. It had eight spindles attached to its mainframe, so a weaver could weave eight threads os the cloth at one time. It is considered to be one of the main aspects of the age of industrialization.

The Age of Industrialisation

The Age of Industrialisation