Onset of Nationalism in India

India as a nation has witnessed an increase in the nationalistic feelings somewhere in the latter half of the 19th century. Prior to that, there were mini battles here and there but nothing much at the national level as such. We may say that with the onset of the Indian National Congress, this nation saw a surge of patriotism and a desire to fight against the oppression of British rule collectively with an organized means. 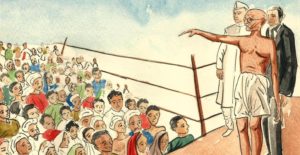 Causes of the National Movement

For any movement to take roots there are several causes that lead up to the final culmination point. Similarly, the making of the National Movement is a result of many things that eventually led to the creation of Indian National Congress. Some of these reasons are briefly listed here.

British came up with several educational institutes in the nation to ensure that their local subjects could understand their language. The motive behind was to enable the subjects to serve the Raj better. However, things didn’t go as planned.

The language helped the educated Indians to better understand the world. It instilled in them ideas of liberty and equality that was propagated by many European liberal thinkers. This helped to unite India in a common goal.

Since the educated elite of India came from all parts of the country, so language could often become a barrier, but with the introduction of English language, the thinkers from across the nation found a common language to communicate their ideas, surpassing the barriers of language.

These same people would take their knowledge and spread it across to other parts of the country by propagating them in their respective languages, thereby spreading the revolutionary ideas far and wide.

Some revolutionary thinkers like Raja Ram Mohan Roy challenged the conventional and biased orders of the society and enlightened people about the various social evils plaguing our nation. With the rise of knowledge in this department, the nation witnessed the rise of evolving new generation of revolutionaries.

The economic policies propounded by the British resulted in widespread poverty and hunger in India. Famines were a constant occurrence leading to lakhs dying. This instilled a feeling of deep-seated resentment against British, which in turn let to the national movement.

British built infrastructure such as roads, railways, and telegraph system in order to improve trade within the country. This, however, helped in connecting the nation. People could easily move from one place to another and also communicate with each other through means of a telegraph, which helped to propagate the idea of nationalism far and wide.

With the presence of the press, Indians found a way of circulating their angst against the British Monarch by nationalistic journals in vernacular language and circulating it.

Lord Lytton, the viceroy of India from 1876 to 1880 is credited with one of the biggest famine in south India which claimed lives of over 10 million people. At the time when India was reeling with the shortage of food and dying of hunger, he would conduct Dilli Durbar in the year 1877, spending obnoxiously on such luxuries.

He is also credited with passing the Vernacular Press Act of 1878 under which all the press material was confiscated as ‘seditious material’. He also is responsible for passing the Arms Act which prohibited Indians from carrying arms. All these arbitrary laws led to excessive anger in Indians which eventually led to the national movement.

The Ilbert bill introduced in 1883 gave Indian judges a right to try Europeans in Indian Courts. This was widely protested against by British and exhibited the deep-seated prejudice against Indians.

Q. What was the reason of dissatisfaction against the British Rule in India?

Ans: The dissatisfaction with the British Rule was the result of arbitrary policies introduced by the British Government and the oppressive treatment meted out to the Indians by British officials. Further, several acts and polities too attributed to this. These were:

Share with friends
Previous
The Mughal Empire
Next
The Making of the National Movement: 1870s-1947