Here is an interesting fact for you. The Gond tribe was actually featured in the famous story of The Jungle Book by author Rudyard Kiping! One of the oldest tribes in India, the Gond tribe has a fascinating history. Let us learn a little bit more about the Gonds.

A few large Gond kingdoms were beginning to dominate the smaller Gond chiefs about the time when Delhi Sultans were declining.  Garha Katanha, a rich state with about 70,000 villages, was mentioned in Akbar Nama. It was the rich state that has earned huge amount of wealth by trapping and selling elephants. It had a large booty of precious coins. 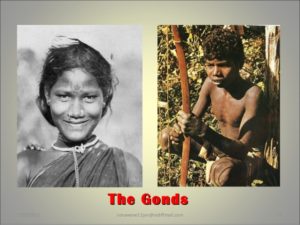 Like most other tribes in India, even the Gonds believe in a greater God or “Bhagawan”. They have a specific tribal name which is “Bara Deo”. But they rarely worship Him. Instead, there are other gods and goddesses in their belief system that represent natural features. So according to the Gonds, every hill, river, lake tree etc has a spirit.

The Gond society was basically divided into equal societies that gradually got divided into unequal social classes with the emergence of large states. The Brahmanas received the land grants from the Gond rajas and further becoming more influential. The Gond chiefs now wished to be recognised as the Rajputs.  Aman Das, the Gond Raja of Garha Katanga, assumed the title of Sangram Shah. Rani Durgwati was very capable and started ruling on behalf of their fiver-year-old sun, Bir Narain, after her husband Dalpat’s death

Question 6: In what ways was the history of the Gonds different from that of the Ahoms? Were there any similarities?

Answer: The differences are as follows,

Share with friends
Previous
Changing Society: New Castes and Hierarchies
Next
A Closer Look - The Ahoms