We can never think of a library and a burial place together, right? They are very different places used for different purposes. One is where we go to learn and the other is where we go to bid goodbye to our loved ones. One place makes us happy and the other makes us sad. But they have one thing in common. Both of them teach us many things about our country, culture and our ancestors. Let’s find out what we can learn from books and burial places.

As we all have gone to the library and have seen a lot of books in the library. There are different types of books related to drama, mystery, horror, religious, action and adventure. Today we are going to study about one of the oldest books in the world called Vedas. The four types of Vedas are: 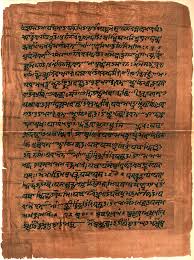 Rig Veda is one of the oldest Veda, it has more than thousands of hymns and these hymns are called suktas. The word suktas means “well said”. That means that the suktas were the sayings. Initially, Rig Veda sayings were only recited. They were not in the written form and they were later composed and printed less than 200 years ago. Rishi and the sages were the ones who laid down the suktas and the other hymns. In the Rig Veda, there were Three Gods who were mentioned. They were,

Division of the Vedas

Each of the Vedas was further divided into 4 parts. They were:

Both Aranyakas and Upanishads were considered as the Vedaant as they dealt with towards the end.

Rig Veda talks about the life of the people and the various books describe the sacrifices done by the people.  These people were described or differentiated in the terms of the work they do, the language they speak, the place they belong to, their family, their community and cultural practices. Mainly they were divided into groups based on their work as,

While the Rig Veda was being composed in the Northwest of the subcontinent, there were other developments also like constructing buildings. Now let’s talk about the type of buildings and the burials of this period. When we talk about the burial, the most important features of it was the big stone boulders known as Megaliths.

These megaliths were used on the burial sites to mark the burial areas. The practice of erecting megaliths began about 3000 years ago and was prevalent throughout the Deccan, South India, in the northeast and Kashmir. There were also surface as well as underground megaliths and they were known as Cist. All these burial graves have something common in them. Generally the dead were buried with food and water in the pots called black and red ware.  Now on the burial sites, we have a demarcation between males and females. The skeletons of females were found with more jewellery compared to the skeletons of male, as males were also using jewellery at that time.

To check out that the skeleton was of a male or female, the pelvic area was checked. The pelvic area which was larger in size was considered of a woman due to the childbearing capacity. Thus, there were various differences found in the skeleton during the excavation. Brahmagiri was one of the sites where a huge number of burials was seen. Burials were mainly in the form of skeletons. Along with the skeleton, there were beads, bangles, shells etc.

Inamgaon was also one of the case study mentioned in the books. It is a site on the river Ghod, a tributary of the Bhima. It was occupied between 3600 and 2700 years ago. Here, adults were generally buried in the ground, laid out straight, with the head towards the north. Sometimes burials were within the houses along with the pots of red and black in colour containing food and water.

There was one classic example of a man who was found buried in a large four-legged clay jar in the courtyard of a five-roomed house that is one of the largest houses at that site. This house also had a granary. The body was placed in a cross-legged position.

Archaeologists have also found seeds of wheat, barley, rice, pulses, millets, peas and sesame. Bones of a number of animals and many bearing cut marks that show may have been used as food have also been found. These include cattle, buffalo, goat, sheep, dog, horse, ass, pig, sambhar, hare and Mongoose.

There are also some examples of the skeleton of some animals of China. The special thing about this skeleton was oracle bones. These bones were bones of the animals and have some writings on them. The most interesting part about the bones was that these bones were heated and cracked.

Based on the shape they get after cracking, the fortune was predicted by the fortune teller. Definitely, there were mistakes but it was a common practice in the major part of China. At that time, Kings in China used to live in palaces. They had large quantities of wealth, including large, elaborately decorated bronze vessels in contrast to the kings of India. There was no use of iron seen in the Chinese region at that time.

Q2. Name the bones which were heated and cracked to read the fortune.

Ans: The Oracle bone of the animals was used to read the fortune.

Share with friends
Previous
What, Where, How and When
Next
What Books and Burials Tell us

What Books and Burials Tell Us

What Books and Burials Tell Us