In Indian constitution, there are sections which state that the offense against rioting, unlawful assembly, affray are considered as the punishable offense. Let us study them in detail.

When two or more individuals fight in public and thereby disturbs the peace of the people around them than they are said to have committed crime. This crime is known as committing an affray. 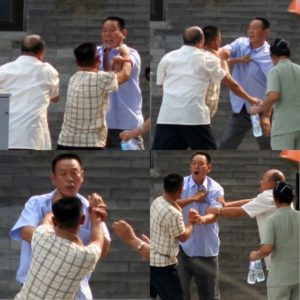 Whosever person commits this crime shall be punished under the India judicial system. The punishment can vary from the description of a term which may even extend for a month. Furthermore, they can also have a monetary fine. The punishment can be monetary or imprisonment or both.

In ‘unlawful assembly’, the group of person should have more than 5 members. Also, the assembly when it was formed was not unlawful but subsequently became an unlawful assembly is also considered in this. They have said to commit the crime if their common objectives are

Whenever the unlawful assembly uses the force or violence in the prosecution of an object that is common for all then every member is guilty. Thus, these members are guilty of the offense once of rioting.

Whosever is found guilty of rioting is to be fined with imprisonment of a certain term or is liable to pay the fine. If the same members of the unlawful assembly are found to be rioting using a deadly weapon which can likely cause than they are also punished. The punishment for this may a term of imprisonment which can be extended to three years or fine or both.

When every member of the unlawful assembly is found guilty of an offense committed in the prosecution of a common object than they are liable for the punishment.

In this case, even the members who knew of the crime likely to be committed are also prosecuted. Every member at the time of committing the crime is guilty and is liable for an offense under section 149.

Q. When 2 0r more people fight in public and as a result the peace of the public than it is termed as