While learning about tort it is important to learn about the General Defences in Tort. General defences are a set of defences or ‘excuses’ that you can undertake to escape liability in tort. But, in order to escape liability, the plaintiff brings an action against the defendant for a particular tort, providing the existence of all the essential of that tort the defendant would be liable for the same.

What are General Defences in Torts?

When a plaintiff brings an action against the defendant for a particular tort or violation of legal right, resulting in legal damages, and successfully proves the essentials of a tort, the defendant is held liable.

However few exceptions are there in which the defendant can plead some defences which can help him in absolving from liabilities. Below listed are the General defences in tort. 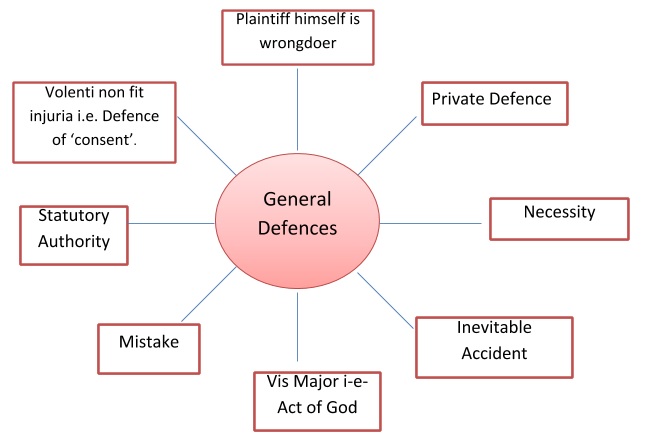 Among the general defences in tort, private defence is the most common. When a defendant tries to protect his body or property or any other person’s property, harms another person by using reasonable force, under an imminent-danger and where there is no time to report instantly to the authority, it is Private Defence. The harm done should be proportional according to the nature of the circumstances.

There should be an immediate threat over the life or property of the defendant or another person’s property in which there is no time to report to the nearest authority. If the defendant is not able to contact that specific authority, then he can start the private defence.

The defendant should apply a reasonable force. It should not be in excess of what is required.

Eg. If a thief breaks into the defendant’s personal property and tries to injure the defendant by beating him with a rod, then the defendant should tackle the thief using proportional force. If he is using a shotgun, then he can fire it on thief’s legs instead of his chest/forehead or it would be unreasonable.

‘Necessity knows no law’. In order to avoid or prevent a great loss or harm, a defendant can cause lesser harm that is justified. The act of the defendant may be not legal but if it is to avoid major damage then he can plead this defence.

Inevitable Accident is a mishap. Its occurrence cannot be prevented despite taking any degree of care and attention by an ordinary and sagacious individual.

A very unusual act or an event which is the result of the natural forces such as earthquakes, volcanic eruptions, floods, droughts, etc. is coined as Act of God or ‘Vis major’. It is beyond human imagination and could not be prevented by human intervention.

When a defendant acts under a mistaken belief in some or the other situation, he may plead the defence of mistake. A mistake is of two types:

Another general defence is statutory Authority. If an act is sanctioned by a statutory enactment or a law passed by the legislature, then the defendant cannot be held liable for the damages resulting in the course of such an act.

When a plaintiff himself is the wrongdoer

It is based on the maxim ex turpi causa that if the plaintiff himself is engaged in the wrongful act or conduct, then he cannot recover damages.

But if a defendant asserts that claimant himself is the wrongdoer and not entitled to the damages, then it does not mean that the court will declare him free from the liability.

In volenti non fit injuria, if a plaintiff has consented to a wrongful act with free content, either express or implied, under no pressure of fraud or coercion, with voluntary acceptance of risk, then he has no right to sue the defendant. Also, there should be a duty on behalf of others.

Q. Which among these is not a General Defence.

Ans: The correct option is d.