The term perimeter means a path that surrounds an area. It refers to the total length of the sides or edges of a polygon, a two-dimensional figure with angles. Let us learn the types of triangle and Perimeter of Triangle Formula.

The perimeter of Triangle Formula 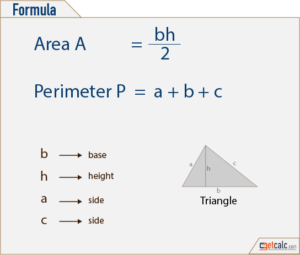 What is the Perimeter of the Triangle?

The result of the lengths of the sides is the perimeter of any polygon. In the case of a triangle:

Perimeter = Sum of the three sides.

The formula of Perimeter of a Triangle:

For a triangle to exist certain conditions need to be met the below conditions,

Hence, the formula for the Perimeter of a Triangle when all sides are given is,

Where, a, b, c indicates the sides of the triangle.

Important Trigonometric derivations in finding the perimeter of a triangle, where;

Condition 1- when in a triangle we know (SAS)- Side Angle Side.

Use the law of cosines to find the third side and then the perimeter:

Now according to the formula,

We can find the c from the above formula. Now we can easily calculate the perimiter of a trialgle using formula, P= a+b+c.

Condition 2- When in a triangle we know (ASA)- Angle Side Angle.

First, we have to find the third angle. As we know a triangle is a combination of 180 degrees total. So angle C is 180- angle A – angle B.

Use the law of sines to find remaining two sides and then the perimeter:

From the above formula we get all the sides now.

We will do the same thing with side c, knowing that its opposite angle C is 60 degrees.

Ans- Using the formula P = a + b + c, replace everything given to you into the formula

Replacing them into the formula gives: