Euler’s formula is very simple but also very important in geometrical mathematics. It deals with the shapes called Polyhedron. A Polyhedron is a closed solid shape having flat faces and straight edges. For example, a polyhedron would be a cube but whereas a cylinder is not a polyhedron as it has curved edges. This Euler Characteristic will help us to classify the shapes. Let us learn the Euler’s Formula here.

What is Euler’s Formula?

Before we go through the Euler’s formula, let’s know about the polyhedron shape in a bit more detail. A polyhedron is a solid object whose surface is made up of the flat faces which are bordered by the straight lines only. In it, each face is, in fact, a polygon. A polygon is a closed shape in the flat 2-dimensional plane which is made up of points joined by the straight lines. 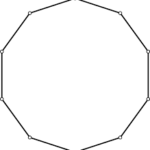 Leonhard Euler (1707-1783) was a Swiss mathematician who was one of the greatest and most productive mathematicians of all time. He spent much of his career blind, but still, he was writing one paper per week, with the help of scribes. Euler gave one very popular formula called Euler’s Polyhedral formula.  Euler’s other formulae are in the field of complex numbers.

Euler’s formula states for polyhedron that these will follow certain rules:

Euler’s Formula for other shapes

Euler’s Formula does work only for a polyhedron with certain rules.  The rule is that the shape should not have any holes, and also it must not intersect itself. Also, it also cannot be made up of two pieces stuck together, like two cubes stuck together by one vertex.

This is often written as FE=X. Some shapes can even have a Euler Characteristic as negative value as for “Double Torus” surface.  So, it can start to get quite complicated value for complex figures.

This formula can be used in Graph theory. Such as:

Solution: In a tetrahedron,

Solution: In a tetrahedron,