What is Geometric Series?

The geometric series formula will refer to determine the general term as well as the sum of all the terms in it. For example, in the above series, if we multiply by 2 to the first number we will get the second number and so on. 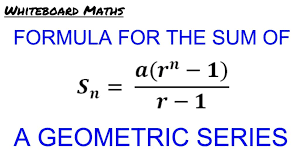 As such series behave according to a simple rule of multiplying a constant number to one term to get to another. Therefore, we can generate any number of the term of such series. So we can examine such series to know about the fixed numbers for multiplication, which is called the common ratios. It is denoted as a symbol ‘r’.

The Formula for Geometric Series

Take \(a_{1}\) as the first term of the sequence.. The common ratio ‘r’ has the formula for its computation is follows:

where n is a positive integer and n >1.

Now formula to add finite n number of terms of the series will be:

For the infinite number of terms, we have much more compact formula as:

Solution: It is a geometric sequence. So using Geometric Series Formula

Thus sum of given infinity series will be 81.

Solution: The given series is a geometric series, due to a fixed common ratio.

since r is greater than 1. So formula for sum of finite terms will be,

Thus substituting values , we have