Polygons can be found everywhere in our surroundings as well as in geometrical math. Many objects are in the shapes of polygons. In this article, students will learn what are polygons as well as various polygon formula. Some examples will help to understand the concept and formula. Let us begin the concept! 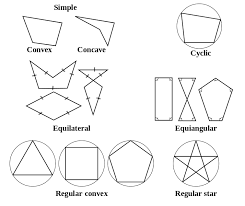 A polygon is any two-dimensional or 2D shape formed with the straight lines. Triangles, quadrilaterals, pentagons, and hexagons are related shapes. The name tells us that how many sides the shape has. For example, a triangle is having three sides, and a quadrilateral has four sides.

A pentagon with all sides of equal length and equal angles, then it is called a regular pentagon.

Polygon is a word taken from the Greek language, where poly means many and gonna means angles. So we can say that in a plane, a closed figure with many angles is called a polygon. There are many properties in a polygon such as sides, diagonals, area, angles, etc.

Some popular Polygons are:

Q.1: A polygon is an octagon and its side length is 5 cm. Calculate its perimeter and value of one interior angle.

Given in the problem:

Length of one side,

The perimeter of the octagon