The standard deviation is the statistic that measures the dispersion of some dataset relative to its mean value. It is also termed as the square root of the variance. It is computed as the square root of the variance by determining the variation between each data point with respect to the mean. If the data points are different from the mean, then there is a higher deviation within the data set. Therefore, the more spread out the data, the higher the standard deviation. In this topic, we will discuss the Standard deviation formula with examples. Let us learn it! 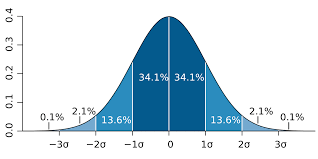 What is Standard Deviation?

On the other hand, higher values mean the values are far from the mean value. It should be noted here that the standard deviation value can never be negative.

For discrete frequency distribution of the type:

Here, N is given as:

Standard deviation is calculated as:

Variance is computed by taking the mean of the data points, then subtracting the mean from each data point individually. After this, squaring each of these results and then taking another mean of these squares. Standard deviation is the square root of the value of variance.

Step 1: First compute the mean of the 10 values given.

Step 2: Make a table as following with three columns, one for the X values, the second for the deviations and the third for squared deviations.

As the data is not given as sample data, thus we use the formula for population variance.