Conic Sections: The term “conic” is derived from the word “cone” and as the name suggests, we are going to cut the cone out in different sections. Each type of section will have its own defining properties. A cone is an interesting shape which is very familiar in our day-to-day lives, like an ice-cream cone, the birthday hat etc. Let’s explore the cones and find out what exciting things are hidden inside a conic section.

Elements of a Conic

The conic sections can be formed by the intersection of a right circular cone and a plane in different ways. For a better idea, take a look at the image below 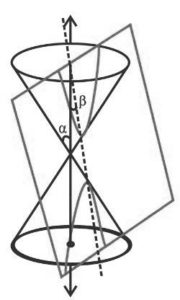 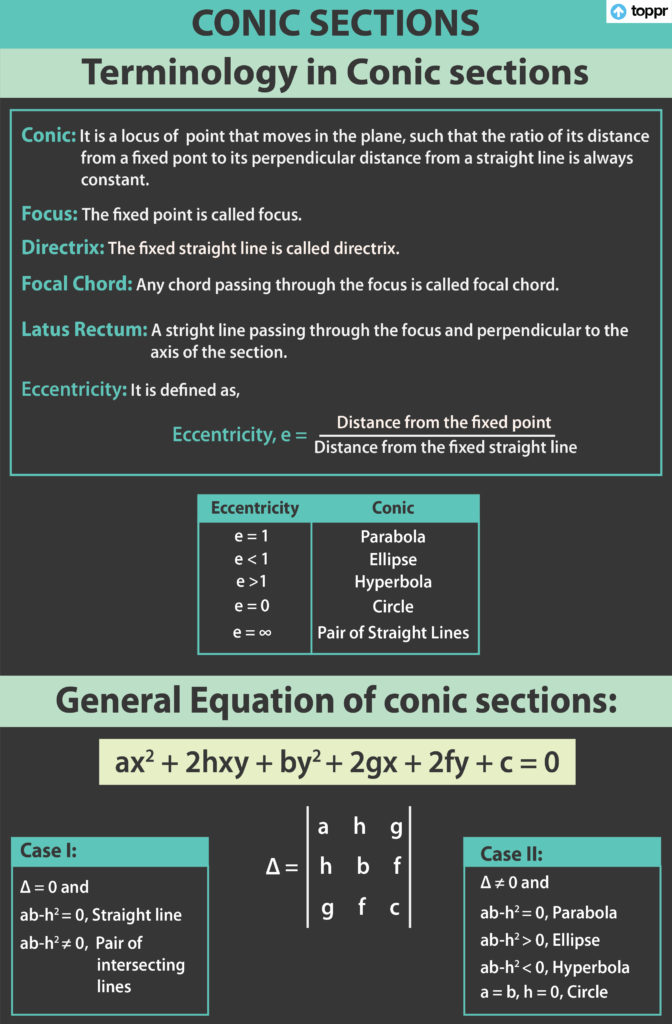 The eccentricity of a conic determines how uncircular a curve is. Like for a circle, the eccentricity is 0 because it is circular. Similarly, an ellipse is the closest look-alike of a circle and hence its value is greater than 0 but less than 1. Eccentricity is basically a ratio of the distance of focus from a fixed point to its perpendicular distance from a fixed straight line, which is constant.

General Equation of a Conic Section

The general equation that represents any conic is given as –

Here, the following conditions govern which conic will be represented from the above equation based on Δ where

Let us take a look at the following cases –

Case 1: When Δ=0, the equation represents the degenerate conics.

*A degenerate conic is a conic which cannot be reduced into a curve. It means that the defining equation will get factored into the complex numbers as the product of two linear polynomials.

Centre of a Conic Section

Thus, if k=0, the equation will represent a point.

Question 2: What are conic sections?

Answer:A circle, parabolas, ellipses, and hyperbolas are known as conic sections because intersecting a right circular cone with a plane can form them. In addition, when the plane is perpendicular to the axis of the cone, the resulting intersection is a circle.

Question 3: What are the four conic sections?

Answer: A conic section refers to an intersection of a plane and a double right circular cone. Moreover, by changing the angle and location of the intersection, we can produce different types of conics. How ever, the basic four types are ellipses, hyperbolas, parabolas, and circle.

Question 4: Why are conic sections important?

Answer: They are important because with their help we can study 3D (three-dimensional) geometry that has wide application. In addition, it helps in electromagnetic field theory to study the nature of the field inside different shapes of conductors.

Question 5: Is half of the ellipses is a parabola?

Answer: When you slice it with a slightly tilted plane, you’ll get an ellipse (or a single point). Therefore, circles and ellipses are both ‘cross-sections’ of a cone or “conic sections.” Most importantly, at that tilt, the intersection is no longer an ellipse instead it is a parabola. Hence, we can say that parabola is the limit of ellipses.