Suppose you increase the number of books in your bag. What will happen to its weight? It will also increase. This is direct proportionality. Let’s take two quantities, x and y which are believed to be in direct proportion. Now, what would that mean? It means, that these two quantities, x and y, will increase and decrease in such a manner that the ratio of their corresponding values always remains constant.

Let’s understand this with the help of an equation. If, x/y = k, where k is a positive number or a constant, then x and y are said to vary directly. Let’s say if y1 and y2 are the values of y corresponding to the values x1 and x2 of x, respectively, then:

How to solve problems with Direct Proportion?

There are two methods to solve a problem with Direct Proportion.

We know, that in a direct proportion:

So, in the case of a direct proportion, one ratio would be given. Then, we’ll have to use the equation above and find all the unknown quantities. Let’s understand this with the help of an example:

We already know that with the increase in the quantity of sugar, the cost of the sugar will also increase in the same ratio. This is the general rule of direct proportion. Now, to solve the problem, we’ll use the equation above:

Using, the above two results, we can find the other values as well. So, the complete table would be as below:

We already know that in the case of a direct proportion: x / y = k i.e. x = k × y. So, now, we can find the value of the k from the values that are already known to us and then use the formula above to calculate all the unknown values. Hope, with that you have understood both the methods of solving a problem of direct proportion.

This means that if, x y = k, then here k is always constant. That is when both x and y are said to vary inversely. Let’s now understand the concept of inverse proportion with the help of an equation. In inverse proportion: x1 y1 = x2 y2. What does this mean? This means, that if y1 and y2 are the values of y corresponding to the values of x1 and x2 of x, respectively, then x1 y1 = x2 y2

How to solve problems with Inversely Proportional variables?

Again, there are two methods to solve a problem with inversely proportional variables.

We know that in the inverse proportion,

So, when you are told to solve this problem, one pair would always be given. Then, we can use the equation above, to find the terms that are unknown to use.

We know that in the inverse proportion, x × y= k. This means that x = k/y. So, to find the value of the k, you can use the known values and then use the formula above to calculate all the unknown values. Now, let’s understand this situation with the help of an example.

Example: If 20 workers can build a wall in 48 hours, how many workers will be required to do the same work in 30 hours?
Solution: Let the number of workers employed to build the wall in 30 hours be y. We have the following table. 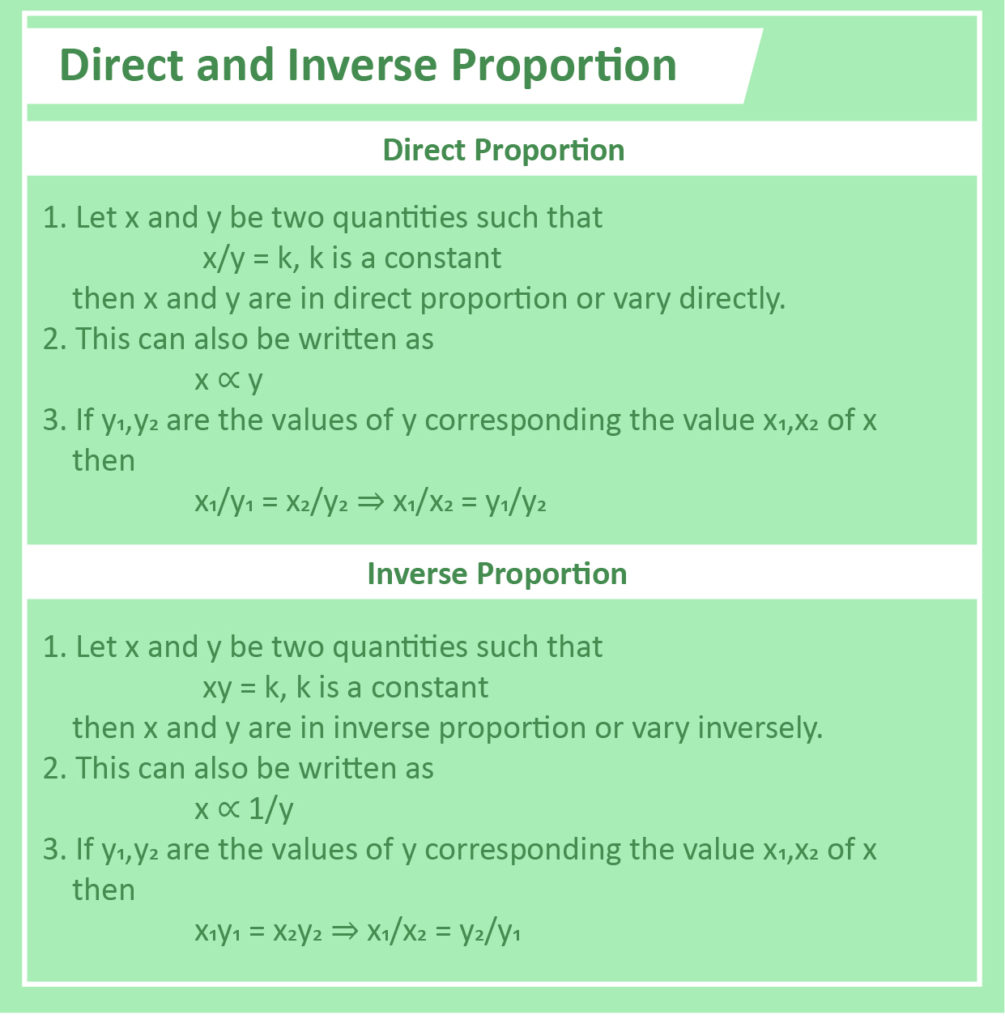 Question 1: Following are the car parking charges near an Airport up to

Question 2: What does inversely proportional mean?

Question 3: What is the difference between direct and inverse proportion?

Answer:The equation for inverse proportion is x  y = k or x = k/ y. Therefore, for finding the value of the constant k, you can use the known values and then use this formula to calculate all the unknown values.

Answer:When anything is proportional to anything else, it means that they change in respect to each other and it does not mean that the values are equal. However, the constant of proportionality serves as a multiplier.