Every closed figure has a definite shape. The shape of an object depends on the number of sides and angles constituting it. Now, depending on the measurement of lengths of sides and degree of angles, varying shapes can be formed. One such shape is a quadrilateral. In the chapter below we shall learn about Quadrilaterals and Types of Quadrilaterals

Quad means four and lateral means sides. All closed figures with four sides are called quadrilaterals. The sides of the quadrilateral may be equal, unequal, parallel or irregular which forms the basis of varying shapes in these four-sided shapes. Whatever may be the external shape, every quadrilateral has four sides, four vertices and with all its angles adding up to be 360 °.

The most common types of quadrilaterals are Squares and Rectangles. We have been studying about these basic quadrilaterals since our primary classes, but in this part of the chapter we shall bring in light various other types of the quadrilateral, which show properties like square or rectangle yet are not named so.

The various types of quadrilaterals are The Rectangle is also a type of parallelogram with a little difference in the angles of the sides. In a rectangle, all the sides are at the right angle or to say perpendicular to each other. The figure below shows a quadrilateral ABCD and since all its sides are parallel to each other we may also call it a type of parallelogram with line segments placed at right angle to each other. This can be written as AB || CD and AC || BD. ∠A =∠B =∠C=∠D= 90° 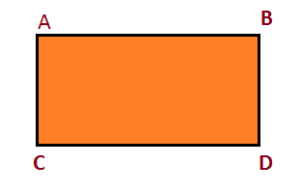 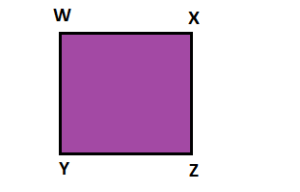 A rhombus is also a parallelogram but with all sides equal. In other words, a parallelogram that shows e resemblance to a square as regards its lengths of sides is called a rhombus. These are sometimes referred to as Diamonds also. Rhombus shows a very peculiar feature regarding their diagonals. The diagonals in a rhombus meet exactly in the middle at a right angle and are said to bisect with each other. 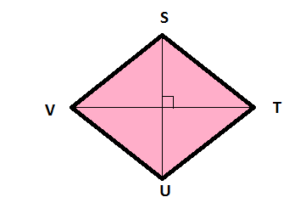 In the figure above we see that STUV is a quadrilateral with sides ST || UV and SV || TU. All its sides are equal, thus ST=TU=UV=VS which also happen to form equal angles. In the above figure, we can see a trapezium with sides AB || DC. A trapezium does not show similarity in lengths and angles of sides hence is an irregular quadrilateral.

Every time we see a tabletop or a handkerchief what comes to our minds are the common type of quadrilaterals, a rectangle or a square. But from this chapter, we have come to know that every quadrilateral is not just a rectangle or square. So the next time you see a four-sided figure, just refer to it as a quadrilateral and reach to conclusions only when you compare it with the rest!

Question 1: What is the similarity between a square and a rectangle

Answer : The line segments of both the closed figure shapes are placed at 90° to each other.

Answer: A quadrilateral refers to a four-sided polygon that has four angles. The seven types of quadrilaterals are parallelogram, rhombus, kite, rectangle, trapezoid, square, and isosceles trapezoid.

Question 3: What is meant by a trapezoid?

Answer: A rectangle refers to a quadrilateral that consists of four right angles. It is also an equiangular quadrilateral. Also, equiangular means that all of its angles happen to be equal (360°/4 = 90°). One can also define it as a parallelogram involving a right angle.

Question 5: Can we say that a diamond is a quadrilateral?

Share with friends
Previous
Types of Triangles
Next
Properties of Quadrilaterals