We already know that a simple closed curve that is made up of more than three line segments is called a polygon. Every polygon has a set of angles that are a result of the line segments involved in the closed figure. In the chapter below we shall learn about the angle sum property of polygons, which indirectly depends on the number of sides in that polygon.

Let’s recap the method. For example, if there is a triangle with angles 45º and 60º. The third angle is unknown. For finding the third angle we follow the given system of calculation:

So the third angle is 75º. Using the above-shown system of calculations we can find out the unknown angle in a triangle, but what about a polygon. Similarly, according to the angle sum property of a polygon, the sum of angles depends on the number of triangles in the polygon.

Relation of Angle Sum Property of Triangles and Polygons

When we analyze a polygon we come to know that it is a compilation of many triangles. Let’s see how? Take a polygon and draw diagonals that divide the structure into triangles. The number of triangles formed from this division gives us the idea of the total sum of angles in a polygon. See the figure below, 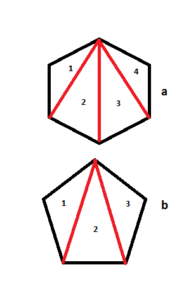 Similarly, in figure b which is a pentagon, the number of triangles constituting the shape is three, so the sum of angles in a polygon shall be 3× 180 which equals 540°. Likewise, for a heptagon, the number of triangles formed after dividing into diagonals is five hence the sum of angles in a heptagon shall be 5 × 180° which equals 900°. 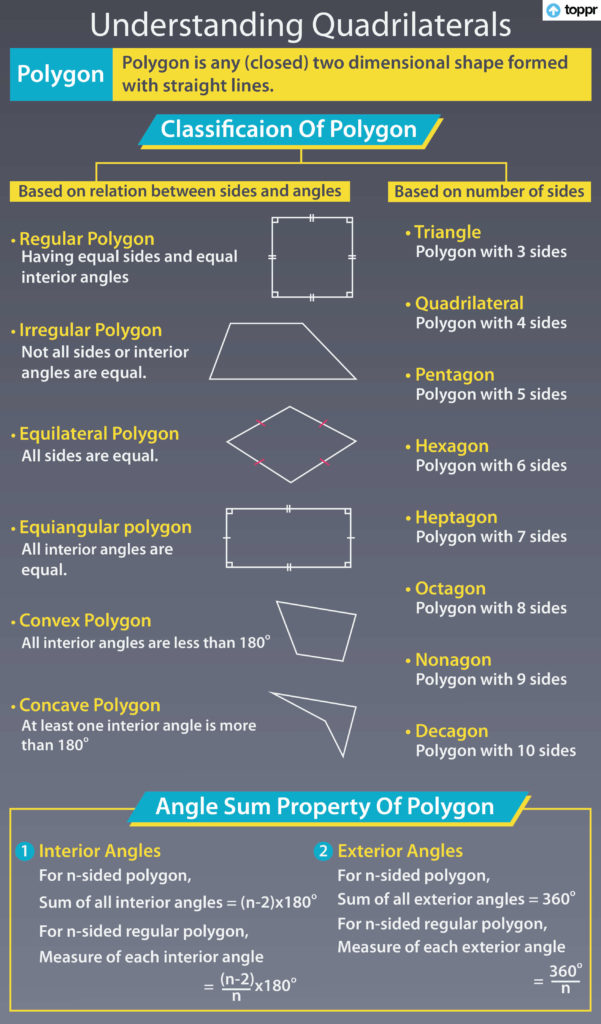 Question 1: Find the sum of angles for the following polygons

Question 3: What is the formula of angle sum property?

Question 4: What is angle sum property of quadrilateral?

Answer: As per the angle sum property of a quadrilateral, the sum of all the four interior angles will be 360 degrees.

Question 5: What is the sum of parallelogram?

Answer: Firstly, please note that sum of the internal angles of any four-sided figure whether regular or irregular will be 360 degrees. However, regular figures like square, rectangle, parallelogram, or rhombus consist of an additional characteristic that the sum of any two adjacent angles is 180 degrees.

Question 6: What is the sum of all angles in a triangle?

Answer: When we look at a Euclidean space we see that the sum of measures of these three angles of any triangle is consistently equal to the straight angle which we also express as 180 °, π radians, two right angles, or a half-turn. However, it was not known for a long period whether other geometries exist having different sums.