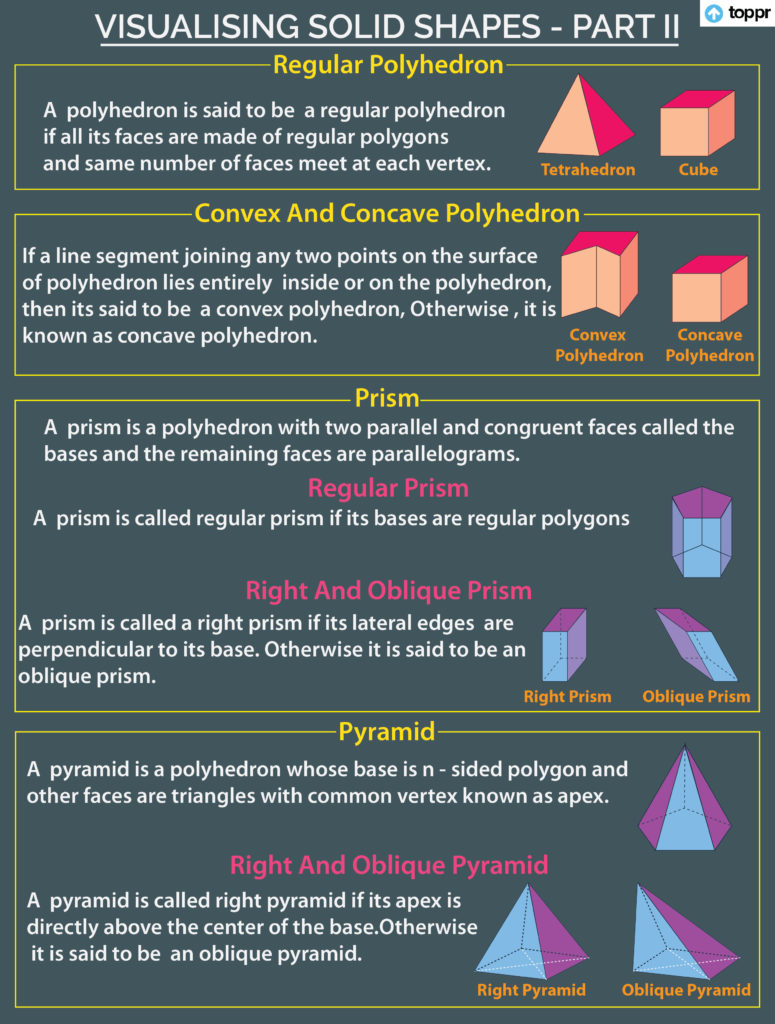 In a polyhedron, three or more edges meet at a point to form a vertex. Following are some example of polyhedrons: 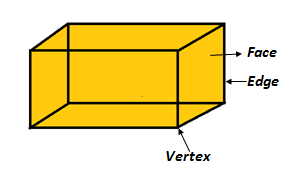 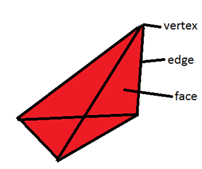 It is not regular because its faces are congruent triangles but the vertices are not formed by the same number of faces. Clearly, 3 faces meet at A but 4 faces meet at B.

If the line segment joining any two points on the surfaces of a polyhedron entirely lies inside or on the polyhedron, then it is said to be a convex polyhedron. Otherwise, it is known as the concave polyhedron.

Two important members of polyhedron family are prism and pyramid. So, let us know more about these two polyhedrons.

A prism is a solid, whose side faces are parallelograms and whose bases are congruent parallel rectilinear figures.

In fig, there is a prism whose bases are rectilinear figures ABCDE and A’B’C’D’E’.

A prism is called a right prism if its lateral edges are perpendicular to its ends (bases). Otherwise, it is said to be an oblique prism. 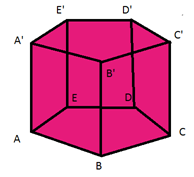 A pyramid is a polyhedron whose base is a polygon of any number of sides and whose other faces are triangles with a common vertex. 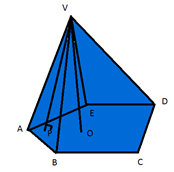 If all the corners of a polygon are joined to a point not lying in a plane, we get a pyramid. The figure shows a pyramid ABCDE. The base of this prism is the pentagon ABCDE and triangles VAB, VBC, VDE, and VEA are five faces.

Question 1: The diagram is an example of: 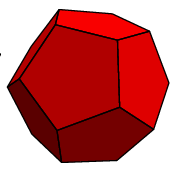 Question 2: What are 5 polyhedrons?

Answer: Polyhedrons are platonic solid, also all the five geometric solid shapes whose faces are all identical, regular polygons meeting at the same three-dimensional angles. In addition, we known as the five regular polyhedra, they consist of the tetrahedron or pyramid, cube, octahedron, dodecahedron, and icosahedron.

Question 3: Is cone a polyhedron?

Answer: No, a cone is not considered a polyhedron although it is a solid shape. Furthermore, a cone has one circular base and it does not have nay face because faces are regular polygons, meaning they have straight sides.

Question 4: Is the empty set a polyhedron?

Answer: Basically, it depends upon your convention. If a set defined by linear inequality can certainly be empty. Whether you can call it a polyhedron or not, it certainly depends upon the convention you choose.

Question 5: Is a cube a polyhedron?

Answer:It refers to a 3D solid object that is bound by six square faces, facets or sides, among which three meet at each other at the vertex.  Furthermore, a cube is the only regular hexahedron and is the five platonic solids. Moreover, it is the only convex polyhedron whose faces are all squares.