You’re reading this on a laptop/computer, what is its shape? Cuboidal! That’s right! What is a Cuboid? It’s a solid shape. Similarly is a cylinder, cones, etc. These are all Solid Shapes. Let us know more about them.

Shapes are either two-dimensional shapes or flat plane geometry shapes. Their sides are made of straight or curved lines they can have any number of sides. Plane figures made of lines are called polygons. Triangle and squares are examples of polygons. Example: We can say figures drawn on paper which have only length and breadth are called 2-d figures. 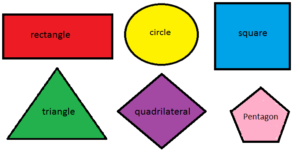 Two-dimensional shapes are planer. Graphically speaking, they depend on only two coordinates X and Y for instance consisting of X unit and Y units respectively. In the case of the coordinating system of more than two dimensions, the shape would still depend on two coordinate directions.

You were also introduced to three-dimensional shapes. Many objects that you see in your day to day life like book, pencil box, ice cream cone, football and cylinder are three-dimensional objects. All these objects occupy some shape and have three dimensions- length, breadth and height or depth. 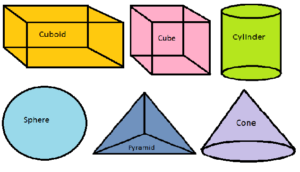 Example: We can say that a figure drawn on paper which has length; breadth and height are called 3-d figures. In a mathematical term, a 3D shape has three dimensions. The D in 3D stands for dimensional. In a world with dimensions, you can travel forward, backward, right, left, and even up and down.

3-d shapes have four properties that set them apart from 2-d shapes: faces, vertices, edges and volume. These properties not only allow you to determine whether the shape is 2-d or 3-d but also which 3-d shape it is. 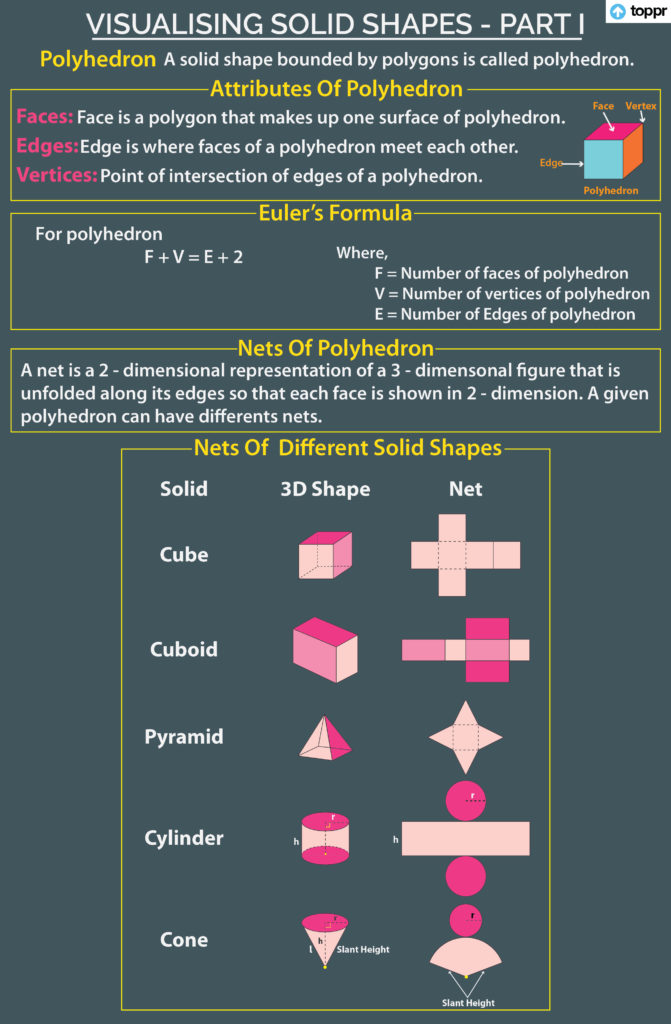 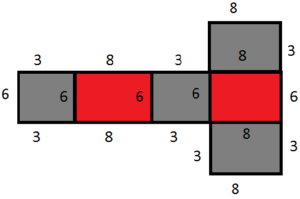 Here is a net pattern for a box. Copy an enlarged version of the net and try to make the box by suitable folding and glueing together. You may use suitable units. The box is a solid figure. It’s a three-dimensional object with the shape of cuboids. We have different nets for different shapes. 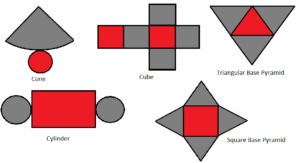 Do you remember the faces, vertices and edges of solid shapes? Here you see for a cube. 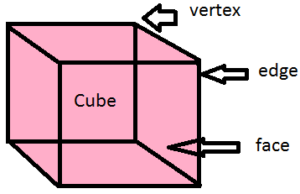 Learn more about 3D Figures like Prism and Polyhedron here. 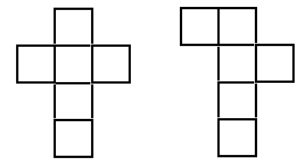 Question 2: What exactly are solid shapes or figures?

Answer: Solid shapes or figures refer to three-dimensional objects. What this means is that every solid figure will have a depth, a width, and a height. For example, the things we see in our daily life like laptop, phones, stone, table, etc. are solid figures.

Question 3: What are the major types of solid shapes?

Question 4: Explain what is a sphere?

Answer: Mathematically speaking, a sphere can be defined as the set of points that are all at the same distance r from a particular point in a three-dimensional space. This distance happens to be the radius and the particular point is the centre of the sphere. The major difference between a circle and sphere is the presence of three-dimensional space.

Question 5: Explain the shape of a pyramid?