A capacitor is a two-terminal passive electrical component used to store energy electrostatically in an electric field. The different forms of the capacitor will vary differently but all contain two electrical conductors separated by a dielectric material. The dielectric increases the capacitor’s charge capacity. The basic function of the capacitor is to hold a group of electrons. Unlike the resistor, a capacitor does not dissipate the energy. But, a capacitor stores the energy in the form of an electrostatic field between those plates. Also, an increase in the size of plates will increase the capacitance. Sometimes we need to use more than one capacitor together in series or in parallel. In this topic, we will discuss the capacitors in the series formula with examples. Let us learn the topic! 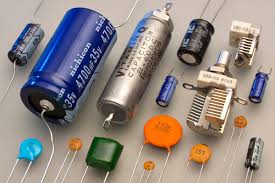 Capacitors in the Series Formula

Several capacitors can be connected together in many applications. Multiple connections of capacitors will act as a single equivalent capacitor.

The capacitance of the resultant capacitor will depend on both individual capacitors and the way of connection. There are two common types of connections called, series and parallel. Here we will see the series combination of capacitors.

If one, two or number of capacitors are connected in series, then the overall effect will be the single capacitor. This will have the total sum of the spacing between the plates of the individual capacitors.

The formula to calculate the total capacitance of the series combination capacitors will be in the same form as that for calculating the resistances for a parallel combination.

The formula for the capacitors in series:

When adding the series capacitors, the reciprocal i.e. \(\frac{1} {C}\) of all the individual capacitors are added together. We did the same thing for the resistors in the parallel combination.

Q.1: Find the overall capacitance across the following sets of two capacitors in series when connected to a 12V AC supply.

a) Two capacitors each having the capacitance of 47 nF.