Heat flux is the rate of thermal energy flow per unit surface area of the heat transfer surface, e.g, in a heat exchanger. The main parameter while calculating heat transfer is heat flux. There are 3 types of generalized classification is there that helps to distinguish between heat fluxes by convection, heat conduction, and radiation. We will further study the types of Heat Flux and the heat flux formula.

What is Heat Flux?

Heat flux also named as thermal flux, is referred to as heat flux density, heat-flow density is a flow of energy per unit of area per unit of time. In SI its units are watts per square meter \(\left (\frac{W}{m^{2}} \right)\). As heat flux has both a direction and a magnitude, and so it is a vector quantity.

Heat flux by the convection process is directly proportional to the temperature difference between solid, liquid, or gaseous media participating in heat transfer. Under the conduction process, the heat flux vector is directly proportional to and usually parallel to the temperature gradient vector. The heat flux formation due to radiation is a flux of electromagnetic radiation. In contrast to convection and heat conduction, it may occur without any intervening medium. 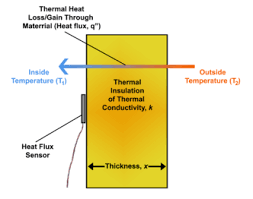 What is the formula for Heat Flux?

Fourier’s law and its application are very important regarding Heat flux. For a pure solid substance, the conductive heat flux JHc in one dimension is expressed by Fourier’s law.

We can measure heat flux mainly by the following two methods:

The Heat flux value has many applications. It helps to evaluate heat transfer performance in many industrial applications, such as thermal protection of space shuttles, thermal management of electronic devices, metal heat treatment, maintenance of boilers, and nuclear reactors, spray cooling, geophysics, etc.

Q.1. A 15 x 20 cm circuit board holds 120 closely spaced logic chips, each dissipating 0.12W. If the heat transfer from the back surface of the board is negligible, determine using Heat Flux Formula:

Total count of chips on the circuit board = 120

Thus, Heat flux on the surface of the board,