Horsepower is like any other unit of power. It is simply a rate at which work is being done. This horsepower unit originates from an experiment. This experiment was set out to measure the power of a single horse. It was determined that a horse is capable of doing 33,000 ft-lbf of work per minute. We will address to this number later in the explanation. To represent the efficiency of a person or a machine for performing some task, horsepower is used as a reliable unit. In this article, we will discuss the horsepower formula. Let us begin learning!

Horsepower is a popular imperial unit of power of an engine. It is defined as the work done by a person or machine per unit amount of time. This term of Horsepower was invented by James Watt. It is a unit of power that compares the power of a machine to the muscle power of the horse.

In earlier days it was used to measure steam engine power output compared to the power of draft horses. But later on, its usage was expanded to different types of piston engines, electric motors, turbines, and other machinery. 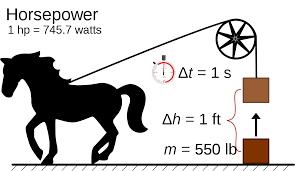 The formula for Horsepower calculation:

First, we will see some equations to help in calculating the horsepower:

For the electric motors, we can calculate the power or horsepower from the torque and speed. For example, if we have a motor with 3,000 rpm and 6 in-lbf then the horsepower can be calculated below.

Here, 63025 is a constant when using rpm for speed and in-lbf for torque units. 5252 is another common constant if the speed is in rpm and torque is in ft-lbf. If the units are different then first we have to make the unit conversion.

The derivation of these constants is as follows:

Though horsepower units is a derivative of the 33,000 ft-lbf / min, it is not critical to understanding how to calculate motor horsepower for speed and torque.

Another common but popular unit of power that motors are rated in is watts. The conversion from watts to horsepower is:

Q.1: Determine the horsepower of a vehicle which moves with a speed of 500 revolutions per minute and has a torque of 100 pound-foot.

Given parameters in the problem are:

Now we may apply the Horsepower formula as below:

Substituting the known values, we get

Therefore the horsepower of the engine of the vehicle will be 9.52 HP.