Viscosity is the important property of fluid while analyzing the liquid behavior and fluid motion near solid boundaries. Clearly, the viscosity of a fluid is the measurement of the resistance for gradual deformation due to shear stress or tensile stress. As we know that the shear resistance in a fluid is due to its inter-molecular friction exerted. It happens when layers of fluids attempt to slide by one another. Thus, we may say that viscosity is the measure of a fluid’s resistance to flow. In this article, the student will learn about the kinematic viscosity formula in particular. Let us learn it!

Viscosity is a concept where fluid shows struggle against a flowing, which is being distorted due to extensional stress forces or shear stress. There are two related measures of fluid viscosity: Dynamic and Kinematic.

Absolute viscosity i.e. dynamic viscosity coefficient is a measure of internal resistance. It is at a unit velocity while maintaining a unit distance apart in the fluid. The shearing stress between the layers of a no turbulent fluid which is moving in straight parallel lines may be defined for a Newtonian fluid.

Whereas Kinematic viscosity is the sort of viscosity that is computed by calculating the ratio of the fluid mass density to the dynamic fluid, viscosity or absolute fluid viscosity. It is from time to time also known as momentum diffusivity. The units of kinematic viscosity are established on time and area of fluid. 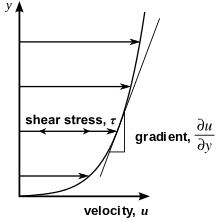 As we know that it is the ratio of dynamic viscosity to fluid mass density. Thus,

Q.1: The absolute viscosity of a flowing fluid is given as 0.67 N s per square m. If the density is known to be 10 kg per cubic m, calculate its kinematic viscosity coefficient using Kinematic Viscosity Formula.

Solution: Known parameters are as,

The kinematic viscosity in formula is:

Solution: Known parameters are as,