The Mach number due to the local speed of sound is normally dependent on the surrounding mediums at some specific temperature and pressure. This flow can be determined as an incompressible flow with the help of this important number.

The medium may be channeled through various devices such as wind tunnels or sometimes even may be immersed in the medium. The Mach number is referred to as a dimensionless number because it is expressed as the ratio of two speeds.

An Austrian philosopher and physicist Ernst Mach has worked on it. Therefore it is named Mach number. Due to it being a dimensionless quantity but not a measurable unit the number is put after the term Mach only, like Mach 4 and not 4 Mach. 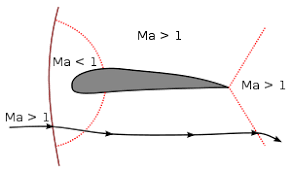 The various regimes of Mach values are given based on the ratio values. These are:

The Formula for Mach Number

Q.1: Speed of some object given as 240 m per second at a normal temperature of 20 degrees. Then compute the Mach number for this object.