Magnetic force is the consequence of electromagnetic force. It is caused due to the motion of charges. A student has learned that moving charges surround themselves with a magnetic field. With this concept, the magnetic force will be described as a force that arises due to interacting magnetic fields. In this topic, we will discuss the Magnetic Force Formula with examples. Let us learn the concept!

What is a Magnetic Force? 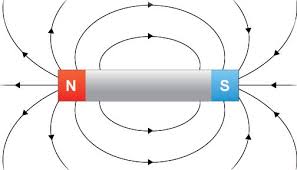 This above force is termed as the Lorentz Force. It is the combined electric and magnetic force on a point charge due to the electromagnetic fields. The interaction between these two fields have the following features:

Now, we will discuss the force due to the magnetic field in a rod that is straight and carrying current. We can consider a rod of uniform length l and cross-sectional area A. In this rod, let the number density of mobile electrons is n.

Then the total number of charge carriers is as: q = nAI, where I is the steady current in the rod.

The drift velocity is v_d. If the rod is placed in an external magnetic field B, then the force applied on the mobile charges or the electrons will be as: \(F = nAI \times qv_d \times B\). Where q is the value of charge on the mobile carrier.

As \(nqv_d\) is also the current density \(j and A \times (nqv_d\)) is the current I through the conductor, then we can write:

Where I is the vector of magnitude equal to the length of the conducting rod.

If \(\theta\)  is the angle between length and magnetic field vectors in radians, then \(F =  I l B Sin\theta \hat{n}\). Where \(\hat{n}\) is the cross product direction vector, which is a unitless quantity.

Find out the magnitude and direction for the magnetic force acting on the section of wire of length 0.100 m using Magnetic Force Formula

Substituting the values in formula,