Shear modulus is used to explain how a material resists transverse deformations. But this is practical for small deformations only, after which they are able to return back to the original state. This is due to the large shearing forces lead to permanent deformations i.e. no longer elastic body. 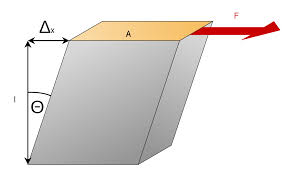 The Formula for Shear Modulus

SI unit of G is Pascal i.e. Pa. Shear Modulus is related to other Elastic Moduli of the Material. This relationship is given as below:

Derivation of the Shear Modulus Formula

Internal restoring forces because of the elastic bodies to get back their initial shape. This restoring force that acts on per unit area of a deformed body is termed as stress. When the forces being applied on the surface are parallel to it and thus the stress that’s acting on the surface also plots a tangent. Here stress is termed as a shearing or tangential stress. This stress is expressed as Newton per square meter.

The strain is the measure of the deformation experienced by a body in the direction of the force applied. Further, it is divided by the body’s initial dimensions. We can express it as:

\(\varepsilon =tan \theta = \Delta xl\)  , is the strain caused due to the applied stress

Note that the quantity strain does not have any dimension, as it is indicative of a relative change in the shape of the body. Hence, we can express shear modulus as:

Solution: The shear stress is exerted over the surface of the cylindrical shape.

Therefore, the area of the cylindrical surface,