When any material or a region of space is in the equilibrium state, there is no motion or change in its energy. A wave is a moving disturbance in the equilibrium. Waves are propagating or moving from one region to another one. During this, waves carry energy in their motion. So, a wave is a disturbance on a medium or in a vacuum too with wavelength, velocity, and frequency. This article will explain the waves physics formulas with examples. 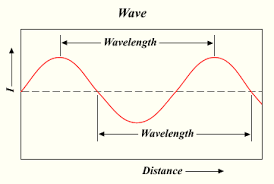 Table of content
1 Waves Physics formulas
1.1 What are the waves?
1.2 The formula for waves Physics
2 Solved Examples

What are the waves?

A wave, which travels through a substance or material is known as a mechanical wave. The material through its travels is called the medium. As the wave travels, the particles in the medium are displaced from their equilibrium states and positions.

It is also important to know that the wave speed is not the same always, as the speed at which individual particles move. There are many types of mechanical waves, which are depending on the way in which the particles in the medium move.

Another important form of periodic motion is the Simple Harmonic Motion i.e. SHM of the medium. In this wave, each particle moves according to the formula for SHM. Such waves are also called sinusoidal waves. Such waves will have the following quantities:

Amplitude A, in units of meters (m),

The angular frequency of a wave in SHM is,

The formula for waves Physics

For the transverse sinusoidal waves, a motion pattern is a series of crests and troughs. Crests are the positions where the wave is displaced from equilibrium by A. The distance from one crest to the next one is known as the wavelength. Wavelength is measured in units of length i.e. in meters. The wavelength is related to the wave speed and frequency as given below:

Q.1: A certain wavelength wave of 850 mm travels through the water with a frequency of 660 Hz. Find out the velocity of the wave.

Solution: First calculate the velocity of the wave using the formula given below:

Solution: We may calculate the wavelength using the formula as: