Scientists are using many skills to investigate the world around them. They make observations and gather information using their senses. Some observations are simple and some are of complex nature. Thus, if scientists want to know more about the substance then they may need to take measurements. Measurement is a very important aspect of science. It is difficult to conduct experiments using only theories without the ability to measure. Wheatstone bridge is one such important tool for measurement and experiments. It is widely used in electrical circuits. This article will explain the Wheatstone bridge formula with examples. 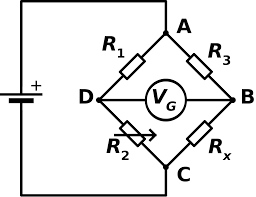 What is the Wheatstone bridge?

It is an important application of Kirchhoff’s rules in Physics. It is applicable to compare resistances and also to determine the unknown resistance in the electrical circuit network. Wheatstone bridge is also known as the resistance bridge.

This is useful to calculate the unknown resistance by balancing two legs of the bridge circuit and one leg includes the component of unknown resistance. It was invented by Samuel Hunter Christie during the year 1833. Later on, it was popularized by Sir Charles Wheatstone in 1843.

This bridge consists of four resistances P, Q, R and S connected along four sides of a square (say ABCD) shaped circuit. A galvanometer G is also connected in it between the points B and D. The current flowing through the galvanometer is \(I_{G}\) and its resistance is G.

Thus, the circuit is composed of two known resistors, one unknown resistor as well as one variable resistor connected in the form of a bridge. This device is very reliable as it gives accurate measurements.

The bridge will be in a balanced condition when no current flows through the galvanometer. One may achieve this condition by adjusting the known resistance and variable resistance.

The formula for Wheatstone bridge

Following is the formula for Wheatstone bridge:

We have the known resistances as:

For zero deflection in galvanometer, we have whetstone bridge formula as:

Q. 2: What will be the value of ‘r’ when the Wheatstone’s network is in balanced condition? Following values are known:

Solution: Given parameters are:

For balanced condition the bridge, we have whetstone bridge formula as: