The photoelectric effect is the name given to the phenomenon of emission of electrons from a metal surface when the light of a suitable frequency is incident on it. What happens when light falls on a metal surface? How can we study it? Let’s find out.

Table of content
1 Suggested Videos
2 Experimental Study of Photoelectric Effect
2.1 Browse more Topics under Dual Nature Of Radiation And Matter
2.2 Apparatus used
2.2.1 Quartz Window
2.2.2 The circuit
2.3 In The Beginning!
2.3.1 The Effect of Intensity
2.3.2 The Effect of The Potential
2.3.3 Effect of Frequency
2.4 In the End
3 Solved Examples For You

The aim of the experiment is to study the emission of electrons by light. We also try and measure the energy of the electrons emitted in the process. In addition to this, we will also observe the relation of these electrons with the frequency of light used. To study the effect, we use an evacuated cathode ray tube connected in a circuit as shown below:

Browse more Topics under Dual Nature Of Radiation And Matter 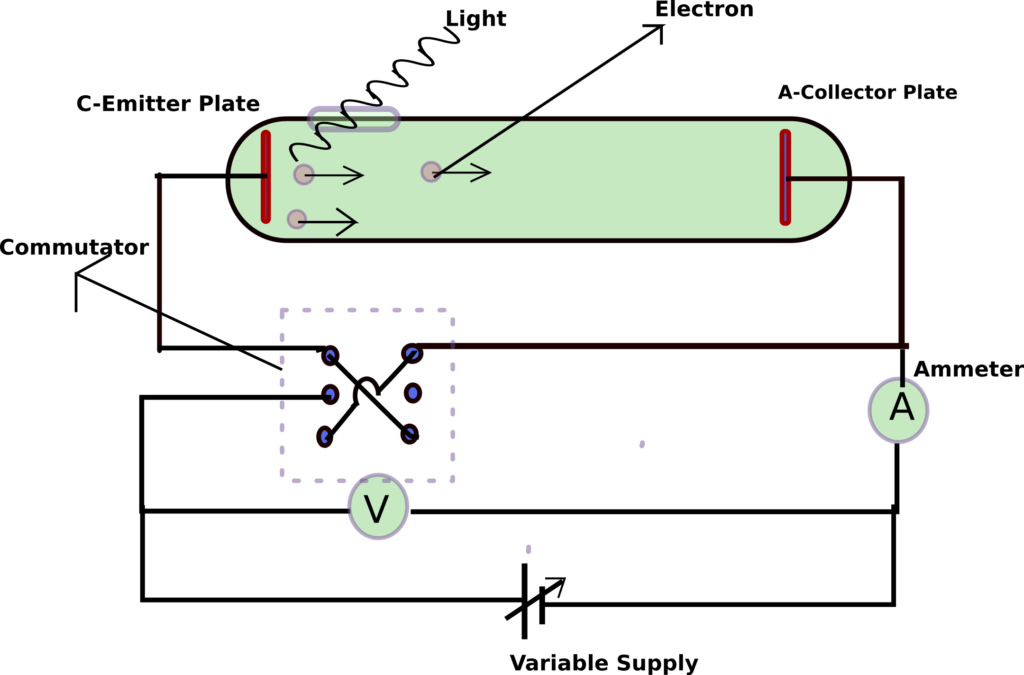 The Collector plate-C emits electrons which are then collected at the collector plate-A. These plates are connected to the battery via the commutator. Let’s switch on this experiment and see what happens! Well, in the beginning, let us have a zero potential. We open the quartz window and observe the reading of the Voltmeter and the Ammeter. Both will give a non-zero reading (say for alkali metals), proving the occurrence of the Photoelectric effect. As we increase the Voltage and change it again, we will make the following observations:

The Effect of Intensity The graph between the photoelectric current and the intensity of light is a straight line when the frequency of light used is above a specific minimum threshold value.

The Effect of The Potential

Suppose you connect C to a positive terminal and A to a negative terminal. What do you expect will happen to the photocurrent? Since electrons are negatively charged, if we increase the negative potential at C, more and more electrons will want to escape this region and run to the attractive plate A. So the current should increase. Similarly, if we decrease the negative potential at C, removing electrons will become difficult and the photocurrent will decrease. Hence the maximum current flowing at a given intensity of incoming light is the saturation current.

As you can see in the graph, the value of saturation current is greater for higher intensities, provided the frequency is above the threshold frequency. Imagine you are an electron and you just escaped the metal surface. Now you are merrily accelerating towards A. What if we became mischievous and increased the negative potential at A? You will feel a repulsion and consequently you will lose speed.

Thus we will get the following relationship between the stopping potential and the photocurrent. We can sum up the observations as follows:

All this is beautifully explained by the Einstein’s Photoelectric equation. On reducing the wavelength of light incident on a metal, the velocity of emitted photoelectrons will become

Solution: C) It will become more.