In physics, it becomes important to learn about friction. It helps you learn a lot about the various processes and the mechanisms behind these processes. It refers to the resistance to the motion of one object moving relative to another. It is not a fundamental force such as gravity and electromagnetism. Through this article, you will get a better understanding of this topic. Moreover, you will learn about its meaning, factors which affect it, applications, transportation and more. 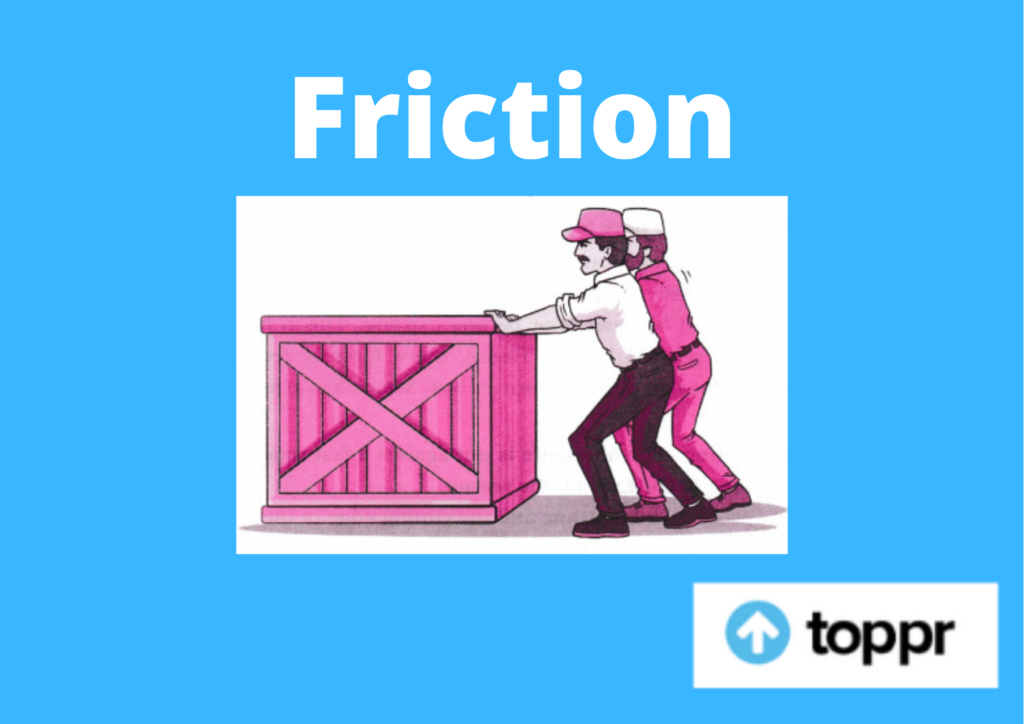 As we discussed before, friction is unlike gravity and electromagnetism which are fundamental forces. Scientists say that it is the result of the electromagnetic attraction between charged particles in two touching surfaces.

Actually, the law which governs it started to form in the 1400s by scientists. However, the complexity of the interactions makes it hard to characterize the force of friction in different situations because it needs experiments which we cannot possibly derive from merely equations or laws.

In other words, for every general rule about friction, you will find just as many exceptions. For example, two rough surfaces like sandpaper when rubbed against each other may have more friction. But, materials polished quite smoothly with their surfaces cleaned carefully like plates of glass can stick to each other in a strong manner.

If we talk generally, there are majorly two factors which it depends on. The first one is the nature of the two surfaces which are in contact and the other is the forces which are acting on these surfaces.

When we talk about the first factor, we mean that it depends on the smoothness or roughness of two surfaces which are in contact with each other. It reduces when the surface is smooth because interlocking of irregularities does not happen that much. On the other hand, it increases when the surface is rough.

The second factor of force acting on these surfaces means that when force is applied with the irregularities, it will increase the friction.

Take a look at any object, you will only see the smooth surface but when you put it under the microscope, you will see that the smooth appearance of the object has rough edges. A microscope allows you to see the tiny hills and grooves which we refer to as the irregularities of the surface.

Thus, we move on an object over the other, the irregularities on the surface will entangle and give rise to friction. In other words, more roughness means more irregularities and greater application of force.

When we look at the types, we see that there are two major types. They are static and kinetic friction. Static friction operates between two surfaces which are not moving relative to each other.

Moreover, kinetic friction acts between objects which are in motion. When we talk about friction in liquids, we see that it is the resistance between moving layers of fluid which we refer to as viscosity. Generally, fluids which are more viscous are thicker. Thus, water does not have as much fluid friction as honey.

Further, atoms inside a solid material may also experience friction. For example, if a solid block of metal gets compressed, all the atoms inside the material will move and create internal friction.

So, you see that in nature, you will not find completely frictionless environments. Even when you think about deep space, tiny particles of matter may interact and cause friction.

When two solid objects move against each other, they experience kinetic friction. Over here, the friction is some fraction of the perpendicular force that acts between two objects (we determine the fraction by a number known as the coefficient of friction). Generally, the force is independent of the contact area and does not depend on how fast the two objects are moving.

Friction also acts in stationary objects. Static friction stops objects from moving and is usually higher than the frictional force which the same two objects experience when they move relative to each other. In other words, static friction is responsible for keeping a box on an incline from sliding to the bottom.

If you take a look at our everyday procedures, you will see that it is quite essential in many of them. For example, when you rub two objects together, friction will result in the conversion of some of the energy motion into heat. Thus, when you rub sticks together, they ultimately produce a fire. Let us take a closer look at the other applications:

Automobile brakes rely on friction as it slows the vehicle when it converts the kinetic energy to heat. Disk brakes also rely on it as well as drum brakes, brake shoes or pads. Rail adhesion is the grip which a train’s wheel has on the rails. Moreover, an essential design and safety factor for automobiles is road slipperiness. Split friction is a dangerous condition which arises because of varying friction on either side of a car.

We use an instrument for measuring friction on a surface which is called tribometer. To measure pavement surface roughness, we call it profilograph.

Friction also helps in heating and igniting matchsticks. When the head of the matchstick rubs against the surface of the matchbox, it produces fire. Further, we make use of sticky pads for preventing objects from slipping off smooth surfaces as it efficiently increases the friction coefficient between the object and the surface.

Answer 1: There are four types and all are different from each other, they are:

Question 2: What do you mean by a friction drag?

Answer 2: We call friction drag as skin friction drag too. The friction of fluid layers causes it to happen. Moreover, it is proportional to the area with which it is in contact and keeps increasing with the square of velocity.