A lava lamp or Astro lamp is a kind of decorative lamp cum novelty item. He is the founding father of the lighting company Mathmos. The lava lamp consists of a thesaurus of a special coloured wax mixture inside a glass vessel, and the rest of the lava lamp contains clear or translucent liquid. The vessel is then placed on a box having an incandescent light bulb. The heat from this bulb causes temporary reductions within the density of the wax and physical phenomenon of the liquid. because the warmed wax rises through the encompassing liquid, it cools, loses its buoyancy, and falls back to the rock bottom of the vessel during a cycle that’s visually implicational pāhoehoe lava, hence the name. Lava lamps have many styles and hues. 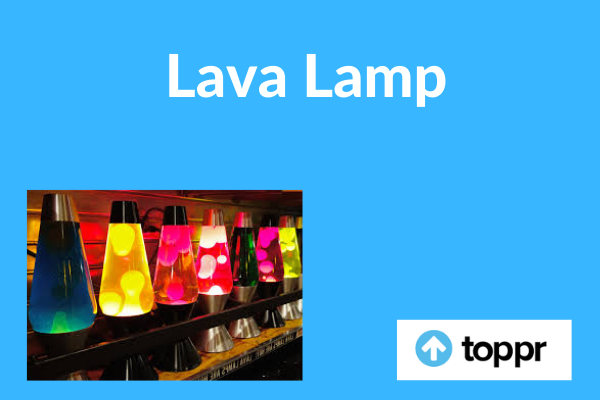 British entrepreneur Edward Craven-Walker had the thought for the lava lamp in 1963 after watching a homemade sandglass, which was made up of a shaker crammed with liquids because it was bubbling on a stovetop during a pub. He hired British inventor David George Smith to develop the device and therefore the formula required to place his idea into practice. Smith invented the first “Display Device”, that was filed and assigned to Craven-Walker’s company in 1965, and subsequently issued in 1968. Craven-Walker named the lamp “Astro” and had variations like the “Astro Mini” and therefore the “Astro Coach” lantern.

In 1965, Adolph Wertheimer and Hy Spector saw the lava lamp at a German fair. They immediately bought the American rights and commenced the Lava Manufacturing Corporation in Chicago, Illinois to sell what they called the Lava Lite Lamp. Within the late 1970s, the US rights were sold to Larry Haggerty, who created a subsidiary of his company, Haggerty Enterprises, called Lava World International, which produced American lava lamps for over 30 years.

The Operation behind Lava Lamp

An old lava lamp usually contains a normal incandescent or halogen lamp which heats a tall glass bottle often tapered. It works on a US patent formula developed in 1968. It consists of water and a transparent, translucent, or maybe an opaque mixture of paraffin, oil and carbon tetrachloride. The clear water or oil can optionally be coloured with transparent dyes.

Common wax features a density much less than that of water and would float on top at any temperature. However, carbon tetrachloride is heavier than water and is added to the wax to form its density at a temperature slightly above that of the water. When the mixture is warmed up the wax becomes less dense than that of water. It happens because the wax expands more in volume than water on heating. After heating it becomes fluid, and bead of wax moves to the highest of the device where they cool (which increases their density relative thereto of the water) and then they descend.

When the wax gets molten, the lamp shouldn’t be shaken or knocked over or the 2 fluids may emulsify. Therefore the fluid surrounding the wax blobs will remain cloudy instead of clear. The wax will settle backtrack at rock bottom, forming one blob once more. In certain severe cases, the formation may pass through many heat-cool cycles.

In 2015, a replacement design was introduced into the market that uses ferrofluid instead of wax.

Homebrew lava lamp recipes are often found over the internet. However, a number of them believe combinations of highly flammable components like alcohol. Such lamps could represent a significant fire hazard within the case of rupture when heated over a light-weight bulb.

Carbon tetrachloride utilized in lava lamps is poisonous. It presents a danger to pets and little children who may accidentally ingest the lava lamp contents upon breaking/spilling the lamp. Oral doses as low as 400 mg/kg result in the death of cats. Also, oral doses as low as 40 mg/kg may cause death in humans. Inhalation of carbon tetrachloride fumes is additionally dangerous.

Answer- Lava lamps can go as hot as 140 degrees Fahrenheit. So your lava lamp could catch fire or explode if overheated. We shall avoid putting a lava lamp on a heated item, like a stove or radiator.

Q.2. What is the liquid in lava lamps?

Answer- The whirling globs consist mainly of paraffin wax, with compounds like carbon tetrachloride that increase its density. The liquid in which the wax floats is usually water or sometimes mineral oil, with dyes and sparkles added for whimsy.