Visible light waves refer to a form of electromagnetic radio waves like the infrared radiation, microwaves, X-rays, and ultraviolet radiation. Furthermore, one can see these waves as the rainbow colours where each colour consists of a different wavelength. Moreover, the colour red has the longest wavelength while the colour violet has the shortest one.

The formation of the white light takes place when all the waves are seen together. Furthermore, when white light comes through the prism, it breaks down into the visible light spectrum colours. 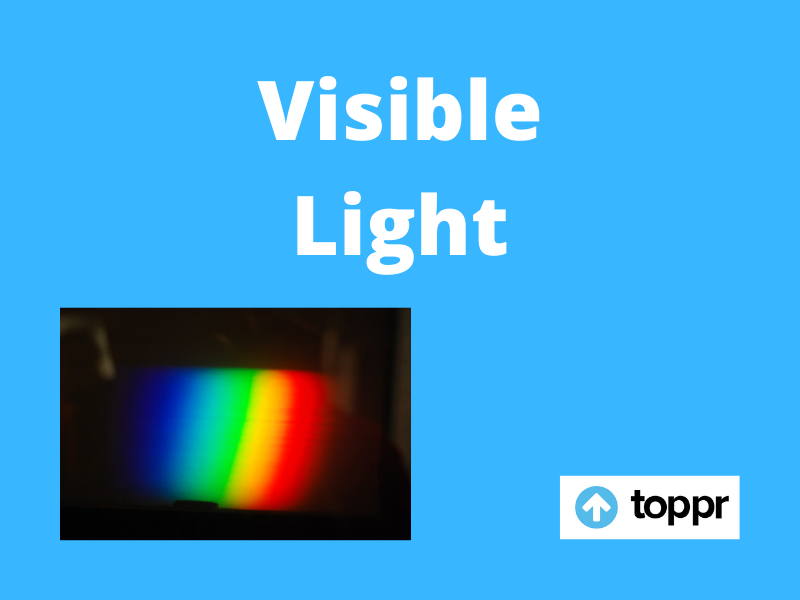 The visible light spectrum is that portion of the electromagnetic spectrum that a human eye can view. The visible light range has a frequency of about 4 x 1014 to 8 x 1014 cycles per second and it comes under the range of EM spectrum between infrared and ultraviolet. Also, it has wavelengths of about 740 nanometers or 2.9 x10-5 inches to 380 nm.

All electromagnetic radiation is light but the human eye is able to see only a small portion of this radiation. Most importantly, this is the portion that is called the visible light. Other portions of the spectrum have wavelengths that happen to be either too large or too small or too energetic to be able to be perceived by us.

As the full spectrum of visible light travels through a prism, the separation of the wavelengths takes place into the rainbow colours due to each colour being of a different wavelength.

The Sun is the dominant source for visible-light waves that the human eye can receive. Furthermore, corona refers to the outer-most layer of the Sun’s atmosphere and one can see it in visible light. However, it is very faint and one can see it only during a total solar eclipse due to the overwhelming bright photosphere.

The moon almost completely blocks the photosphere and chromosphere during a total eclipse of the Sun. Furthermore, the formation of the tapered patterns—coronal streamers—around the Sun takes place by the outward flow of plasma. Also, the shaping of the plasma is by magnetic field lines that extend millions of miles into space.

Question 1: What are visible light uses?

Question 2: What are spectra and spectral signatures?

There is an absorption of certain colours of light by certain elements in the Sun’s atmosphere. Moreover, these patterns of lines which are within spectra have characteristic of being like fingerprints for atoms and molecules. The fingerprints for elements are clear to those who have knowledge about those patterns when looking at the spectrum of the Sun.