The usage of transportation begins from the very early age of the human era. It was continuously changing over a period of time. The very first means of transportation was the human foot. Usually, people walk large distances to reach places in those days. Then the first improvement made to this situation by adapting the different surfaces. Also, people living in snow areas wore spike-like attachments for helping them on the slippery ground. Also, they knew that trees and logs float on water and hence they dug out the middle portion of logs to make them suitable for seating. In this way, it helped people to use water bodies as the means of transport. In such a manner, this article will discuss transportation history in brief. 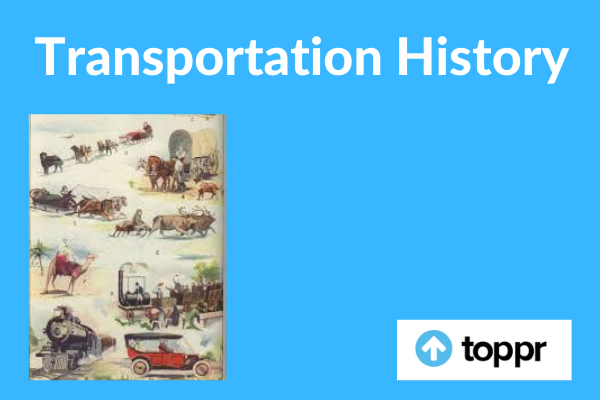 Whether by land or by sea, we human beings are always sought to traverse the earth and hence to move the new locations. This evolution of transportation has brought us from simple canoes to space travel. Therefore, there is no telling where we may go next and how we will get there.

Around 3500 BC, humans started using their first wheeled vehicles. As a means of transporting the small loads, wheels were attached to the carts for easier movement. Also, almost during the same period, people developed simple logs into the controllable riverboats with oars to direct their vehicle. Further, in the time ahead, people went on to tame animals as a means of transportation.

The Discovery of the Wheel

We may say that transportation history took a drastic change after the introduction of wheels. With the invention of the wheel and axle, other smaller devices such as wheelbarrows came into use. Further, the means of transportation were continuously improved gradually. For example, the use of iron horseshoes became very popular in transportation. Also, clubbing the different modes of transportation was become possible as in carriages. From then onwards progress of transportation medium started gaining large momentum.

The various types of transportation in existence at the present time are as given below.

Submarines came into existence around the period 1600s and were being used as proper modes of public transportation. Also, carriages, steamboats, cycles and hot air balloons became the popular modes in this regard.

The first gas engine vehicle was invented by Jean Lenoir in the year 1862.

Existing means of transport were gone through continuous improvement. For example, steam engines lead to the invention of bullet trains. Water transport is being considered as the slowest means of transport. Hence, it is more usable for the transportation of bulky raw materials and similar commodities.

Q.1: What was the first transportation mode invented?

Answer: The canoe was invented at a very early age, around 8000 B.C, whereas the first form of public transportation was a stagecoach operated in Paris during the year 1662.

Q.2: What are the main types of transportation?

Answer: The different modes of transportation are air, water, and land transport. Other modes are also in existence like pipelines, cable transport, and even space transport.