Debentures are the medium to long-term debt instrument used by large companies to borrow money, at a fixed rate of interest. In legal terms, a debenture is nothing but a document that creates debt. It is nothing but a certificate of loan proving the fact that the company is liable to pay a specified amount with interest. The debenture holder can freely transfer the debentures. Unlike the shareholders, debenture holders do not have any voting right in the organization. Debentures issued at Par is an important part of this article.

There are specific steps for the complete acquisition of debentures by a person in his own name. It involves the investors applying for debentures according to the prospectus given by the company.

Sometimes, the company asks for the whole amount on application only but mostly the company does it on an instalment basis. Debentures can be issues at 3 different values which are : 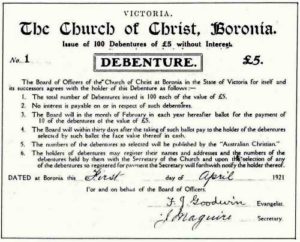 When the payment received and the nominal value of the debentures are same then it is the case of ‘Issue of Debentures at Par’. In other terms, it is when the issue price is equivalent to the face value. For example, Issue of Debentures of Rs.1,000 for Rs.1,000.

There are different journal entries in connection with the issue of debentures.

1. On receipt of Application Money

2. On allotment, transfer to Debentures A/c

3. Amount Due on Allotment

Question for You on Debentures Issued at Par

Alabama Ltd. issued 10,000, 10% Debentures of Rs.100 each, at par, redeemable at par after 5 years, payable Rs.70 on the application and the balance on allotment. The debentures were fully subscribed and all the money was duly received. Prepare Journal with the complete format.