A Debenture is nothing but long-term security which yields a fixed rate of interest, issued by a company and secured against assets. Creditworthiness and reputation of the issuer back the debentures. It is an important element or source of fund generation for the corporation and the Government. Debentures issued at Premium is yet another instrument which a company uses to make its debenture more reputable in the market. Hence, Premium along with the basic price shows the high demand for such debentures in the market. At the same time, premium increases the profits of the issuing company.

Debentures Issued at Premium – What is Premium?!

When securities are issued at a price higher than the nominal value, it is called the ‘Issue of Securities at Premium’. Hence, the excess of issue price over the face value is nothing but the amount of premium or Securities Premium.

The most noteworthy point is that the company uses the word “Reserve” because this can be used for various purposes.

Finally, Section 52 of the Companies Act, 2013 states that the security premium can only be utilized or for the following purposes: 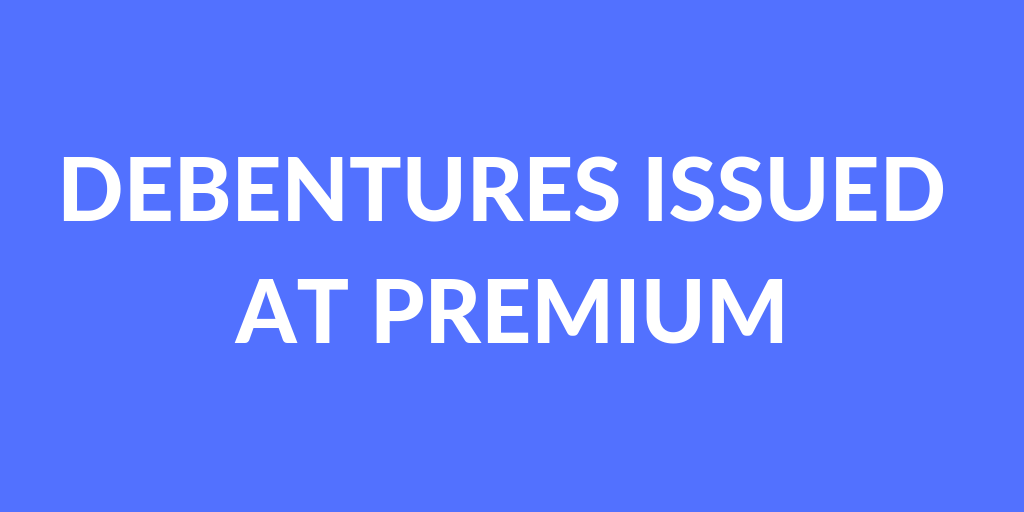 1. Firstly, for issuing fully paid bonus shares to the members

2. For writing off preliminary expenses of the company

3. For writing off the expenses or the commission paid or discount allowed on any issue of shares or debentures of the company

4. For providing for the premium payable on the redemption of redeemable preference shares or debentures

5. For purchasing its own shares or buyback of the shares (Sec.77A). Sometimes, the securities are issued at the premium for consideration other than cash. In such cases, the company transfers the sum equal to the amount of premium to “Securities Premium Reserve Account”

A person has to follow a specific process to take some debentures in his own name. It involves the investors applying for debentures according to the prospectus given by the company.

Sometimes, the company asks for the whole amount on application only but mostly the company does it on an installment basis.

Debentures can be issues at 3 different values which are :

Debentures are said to be issued at a premium when the amount collected for it, is greater than the nominal value (face value) of the debentures.

In other terms, it is when the issue price is greater than the face value of the debentures. For Example, Issue of Debenture of Rs.1,000 for Rs.1,200 (Rs.200 being the amount of premium)

There are different journal entries in connection with the issue of debentures:

Let us understand them in detail.

1. On the receipt of Application Money

2. On allotment, the application money on debentures allotted is transferred to debentures account

Note: If the company calls for the amount of premium on application only then this entry will be like:

3. Amount Due on Allotment (Along with Premium)

Question on Debentures Issued at Premium

Obama Ltd. issued 10,000, 10% Debentures of Rs.100 each, at Rs.120 (Debentures issued at Premium), redeemable at par after 5 years, payable Rs.70 n the application and the balance on the allotment (30+20). The debentures were fully subscribed and all the money was duly received. Prepare Journal.

Although most of the entries are similar to the case of par, the only difference is the entry with which the premium is associated. It can be associated with either with the application or any of the subsequent entry. As a result, the entry of allotment is different from the basic entries. Above all, the premium is an important aspect.