What is Debenture? Debentures are some of the debt instruments which can be used by government, companies, organization for the purpose of issuing the loan. Based on the reputation of the corporates loan is issued on fixed ROI (Rate of Interest). When companies need financial support they borrow the money for expansion or anything they need for at a fixed rate of interest. In this article, we will discuss what is debenture, features of debentures and contents of debentures.

Debentures are one of the most simple instruments by which companies can raise debts. They act as simple loans which a company borrows to meet its financial needs.

A debenture is basically just a bond. It acknowledges the fact that the company has borrowed a debt. The person who buys these debentures becomes the company’s creditor.

Because of the nature of what the debenture acknowledges, we can call it an instrument evidencing the debt. And, hence, it discloses the principal debt amount and interest payable on it. 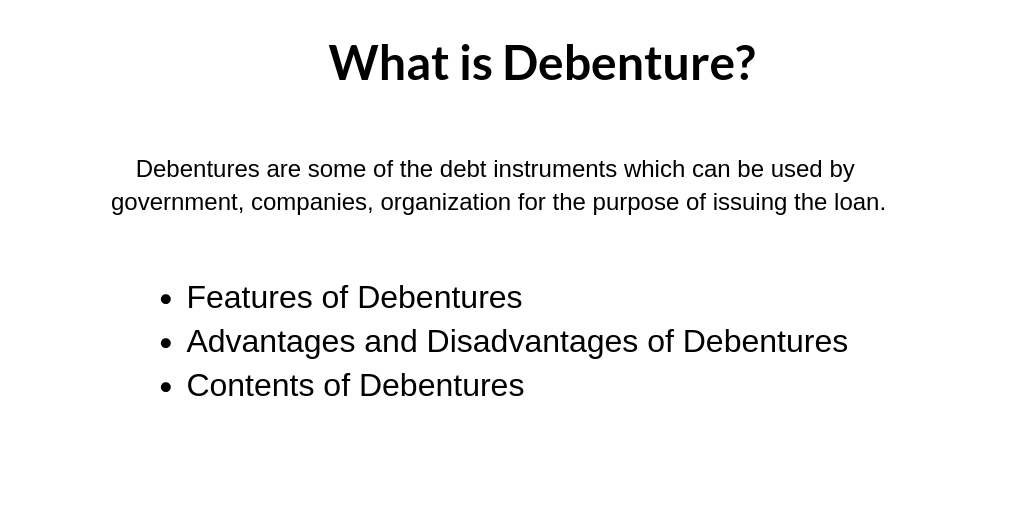 According to the Companies Act, 2013, a debenture generally may include stocks, bond other instruments. These instruments must act as evidence of debt.

Furthermore, they may or may not constitute a charge on the company’s assets.

This definition under the Act also says that a debenture cannot carry any voting rights. Thus, in this regard, debentures are different from equity shares. Now that we are clear with the meaning of debentures, let’s now take a look at their features.

Learn more about the Advantages and Disadvantages of Debentures here in detail. 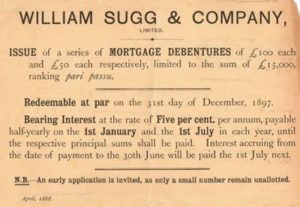 1. Debentures are nothing but documents. In other words, they possess documentary value.

2. These documents are evidence of debt. This shows that the company owes a debt to the debenture-holder.

3. The interest on debentures is always payable at a fixed rate. Further, the company has to pay interest regardless of whether it makes profits or not.

4. The company may either repay the debt or even convert the debenture into shares or other debentures.

5. Debentures may or may not carry a charge on the company’s assets.

6. Finally, debentures are generally transferable. Debenture-holders can sell them on stock exchanges at any price.

Keeping in mind the features and meaning of debentures, we can compile a list of their contents.

Firstly, a debenture must state the name of the issuing company.

Secondly, it has to say the principal debt amount and interest payable by the company.

Further, it should show the debenture-holders name and the date on which the amount is payable. It should also disclose, in brief, the rights it carries. The debenture-holder must also know whether they are redeemable or convertible.

Debentures may be of several types. They may be convertible or non-convertible into equity. They may either secured by the company’s assets or may be unsecured.

All debentures must state their type. This enables the debenture-holder to knows his rights and liabilities.

Question: Fill in the blanks in these following statements.

a) A debenture is basically evidence of _____ on the part of the issuing company.

b) The company may either convert the debentures into shares or _____ the debt.

c) Debentures may or even may not constitute a _____ on the company’s assets.