Python object are the variables that are created in Python. Each variable created to assign a value or a container or holder of a value will be treated as an object. The object () function is an in-built function in Python that returns an object that does not possess any features or attributes. This object will be considered as the base for all the classes.

In Python, the object is a class itself. A class is a user-defined prototype. It includes a definite set of attributes that provide characteristics to the objects present in the class. The objects can be defined as a unique instance of data structure that can include data members and methods. The syntax which is followed while defining the function is given below.

The object (0 function does not need any parameters to be passed. It will create an object that does not have any defined attributes without the need for an argument. 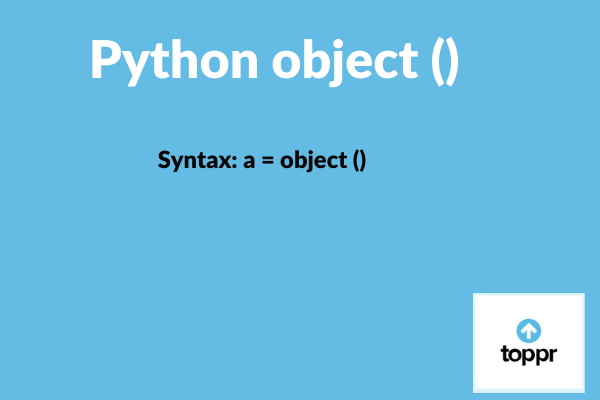 Example: How does object () work?

The program provided below shows how the object () function can create a featureless object.

The objects that are created using this method will always be unique. Thus, if two objects created with the help of the object () function are compared, they will show False.

What is an object () in Python?

The object () function is an in-built function in Python used to create an object that does not hold any features. The object created includes all the methods and properties considered a base for all the classes included in the code.

Here is an example for demonstrating the properties for the object() in Python.

What is an object in OOP Python?

The object in OOP Python refers to any unique instance of data. An object is defined by its class and includes data members as well as methods. In Python, the class variables, instance variables, etc., are all treated as objects.

What do you call an object in Python?

To call or initiate a method in Python, the method __init__ is used. The method is a class constructor used to create a new instance or object in a class. The first argument of the method should be self, after which all the other class methods can be declared normal functions.

How do I see the object methods in Python?

There are different ways through which all the object methods in Python can be listed and printed. One of these methods includes the dir () method. It is a built-in function that returns all the functions and properties of a class. One can also use the inspect module to list the methods. The Option Parser (optparse) is used to get the list of all the methods.