One of the topics that are asked in all the competitive exams in quantitative aptitude is mensuration. Mensuration has many different kinds of topics in it. Out of these topics, the quadrilateral is one of them. And today we are going to discuss results of quadrilaterals in detail. We will also explain you the types of quadrilaterals and it’s properties. Later we will discuss some solved examples.

A polygon that has four sides is called a quadrilateral. Thus squares, rectangles, rhombus, trapezium are quadrilaterals.

The area of a quadrilateral = ½ × (product of diagonals) × (sine of the angle between them). 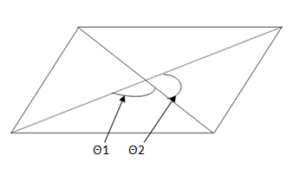 From the figure, you can see the Θ1 and Θ2 are sine angles between the diagonals. The total angle made by these angles is always 180°. So, it can be said that this two angles will always be supplementary to each other.

Properties of a Quadrilateral

As mentioned above there are five types of the quadrilateral.

A rhombus which has all the angles 90° or a rectangle with all the sides equal is called a square. Area of a square = height × base

A parallelogram which has all the angles of 90° is called a rectangle. Area of the rectangle = product of the two adjacent sides.

A quadrilateral whose only two sides are parallel to each other is called a trapezium. Area = ½ × sum of parallel sides × height.

Based on the data, this will be the figure: So the correct answer is C

In this question, we will denote ‘b’ as the base h1 and h2 as the altitudes of the triangle and parallelogram respectively.

Then according to the data in the question:

Thus the correct answer is A.

Q. Quadrilateral ABCD is a parallelogram, AC, BD is the diagonals & intersect at point O. X and Y are the centroids of ∆ ADC and ∆ ABC respectively. If BY = 6 cm, then OX = ?

Q. In a parallelogram ABCD if bisectors A and B meet at X, then the value of AXB is?

Q. If one diagonal of a rhombus is equal to its side, then the diagonals of the rhombus are in the ratio:?