In this section, you will be asked to unscramble words, guess words and detect analogies. Questions in reasoning ability are generally considered as scoring and that is why a great deal of emphasis has to be put on understanding the question first. You are required to unscramble the question as quickly as you can. If you understand the question properly then it will just be a matter of seconds before you are able to solve it.

When you are solving reasoning ability you will find a variety of questions. Many of these questions require your logic while others will require enough practice so that you can solve them quickly. Questions in reasoning ability are generally considered as scoring and that is why a great deal of emphasis has to be put on understanding the question first. You are required to unscramble the question as quickly as you can. If you understand the question properly then it will just be a matter of seconds before you are able to solve it.

Especially for banking exams where time per question is so little as compared to other competitive exams.One such type of question that is asked in these competitive exams is letter-word problems. In these types of questions, you need to answer the number of alphabets in a word that has same difference between them as in alphabets. For example, BUCKET. In this word, the letter between C and E is K, while in the original alphabet the letter between C and E is D. Thus in both the cases there is only one letter in between the letters. And that is why the answer to this question is one. 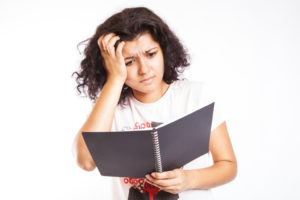 Normally, the level of these types of questions asked in the exams is easy. But sometimes they can be tricky also and thus you can get stuck in these questions. And that is why the best way to solve these questions is to number the alphabets. This will make it easier for you to determine the letters which are in the same sequence in the word easier. We will explain this to you with an example.

Suppose the word is PROTEST. Now assign the numerical value to all the alphabets based on their alphabetical order. So for P we will have 16, similarly R = 18, O = 15, T= 20, E = 5, S = 19, T =20. Now start from the left and see if any alphabet in the word is nearby to each other as per the original sequence of English alphabets. Continue this process for the all the alphabets till you reach the rightmost alphabet. After completing the above start from the rightmost alphabet till the leftmost alphabet. In short, you need to reverse the previous process.

You will notice that when you were going in the forward direction, there is a letter between R and T. And according to the numerical values assigned to them, the 19th letter should be between them. So you have found your one pair. Now again in the forward direction only you will not find a letter between S and T and this is what their numerical values tell us. There is no alphabet in between these letters in the original English alphabet sequence. And that is why in the word PROTEST, there are two pairs (R, T) and (S, T) that have the same letters in them as compared to original English alphabetical order.

Here are a few solved examples which will help you understand the topic better.

Q. In the word, ‘CREATIVE’ there are how many letters which are in the same order as in the original sequence of the English alphabet?

Here in the word ‘CREATIVE’, there is a letter between C and E and T and V. While in the original English alphabetical sequence also there is a letter in between these letters. Thus we have two pairs of letters. But here there is also a third pair in the form of A and E. In the English alphabets there are three letters in between this sequence i.e. B, C, and D. Here in this word also there are letters in between this sequence. So the correct answer here is three

Q. For the word, ‘SEQUENTIAL’ how many letters have the same sequence as compared to English alphabets?

This is one of trickier questions in letter-word problems. The logic is same but there are multiple pairs which have more than one letter in it. Starting from the left you can see that there is a letter between S and Q. When you compare with the letters in the alphabet there is also a letter R between S and Q. So we have one pair. Now there are two letters between Q and N, four letters between S and N, and three letters between E and A. When you compare these sequences with the original sequences in the English alphabet you will find the same number of letters. Thus, there are four pairs of letters which have the same sequence as in English alphabet in the word SEQUENTIAL.

Q 1. How many pairs of letters have the same sequence as English alphabetical order in the word “PRISON”?

Q 2. In the word, “REPERCUSSION” how many letters have the same sequential order when compared to the English alphabetical order?

Q 3. How many letters in the word, “BEHIND” has the same sequence as English alphabetical order?