Have you ever wondered why a utensil becomes hot when it is kept on a flame? Simple, because the heat passes from the flame to the utensil. Now, what happens when you remove the hot utensil from the flame and keep it down? Does it start cooling down? Why? Because heat is transferred from the utensil to the surroundings. So, it is clear that heat flows from a hotter object to a colder object. This phenomenon is called transfer of heat.

Small Activity on Transfer of Heat in Solids

Take a rod of any metal. Fix a few small drops of wax on the rod at an equal distance from each other. Also, fix the rod onto a stand or use two bricks as shown in the image below. Now, heat the free end of the rod.

This process of transfer of heat from the hotter end to the colder end is called conduction. In most solids, heat is transferred by conduction. This brings us to the question – do all solids conduct heat? Now, let’s perform a small experiment to find out:

So, we observe that some objects allow conduction while some don’t. The solids that allow transfer of heat by conduction are called conductors of heat. On the other hand, the ones that don’t are poor conductors or insulators. We spoke about solids. But, what about liquids and gases? Let’s find out.

Small Activity on Transfer of Heat in Liquids

Take a beaker or a flask and fill it with water up to two-thirds its depth. Place it in a manner that you can heat it with a candle below it. After arranging, leave it for the while so that the water in the beaker is still. Gently, place a small crystal of potassium permanganate at the bottom of the flask. Allow the water to become still again. Now, heat the water right under the crystal. What do you see? As the water gets heated, the hot water starts rising up and the cold water moves towards the flame. This is seen by the movement of purple lines in the water. Also, this process continues till the entire volume of water gets heated. This process of transfer of heat in liquids is called convection.

Small Activity on Transfer of Heat in Gases

Light a candle and place it on a stand. Now, place one hand above the flame (at a safe distance so that you don’t burn your hand) and the other at the side of the flame. Do both the hands feel equally hot? No. The hand above the flame feels hotter since air gets heated by convection. On the other hand, the air on the side does not feel as hot because there is no convection. Talking about the transfer of heat in gases, people living in the coastal areas experience an interesting phenomenon.

In the day, when the sun is out, the land gets heated faster than water. Hence, the air above the land becomes hot too and rises up. The cooler air from the sea rushes in to take its place and the warm air moves to the sea, completing the cycle. (Refer the image above.) This air from the sea to the land is the sea breeze and helps in keeping the coastal areas cool. 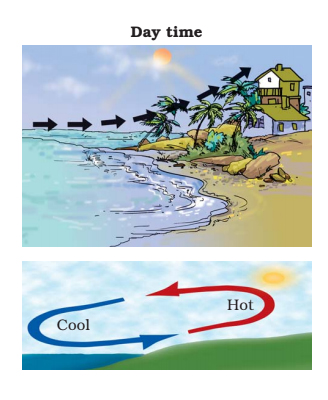 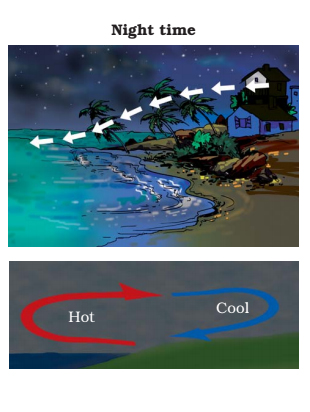 Have you ever imagined, how does the heat from the sun reach us? Millions of miles away? It cannot possibly be because of conduction or convection since the universe has no air or any other medium to transfer the heat. The answer is radiation. The transfer of heat by radiation happens without any medium.

Why do we feel hot when we sit in front of a heater? There is no solid or liquid connecting us? It is not convection. It is because of radiation. Remember, the first activity we did of keeping a utensil on a flame and then bringing it down to cool off? How does it cool? By radiating heat.

All hot bodies radiate heat into the surroundings. When this radiated heat falls on an object a part of it is reflected, a part is absorbed and a part may get transmitted. The absorbed part of the energy increases the temperature of the object.

Q1. A wooden spoon is dipped in a cup of ice cream. Its other end

Q2. Stainless steel pans are usually provided with copper bottoms. The reason for this could be that

Ans. (c) – Copper is a better conductor of heat than stainless steel. When making cooking utensils, it is important to use metals that heat faster so that the cooking time reduces. Hence, stainless steel pans are provided with copper bottoms.