‘The world is going to end tomorrow’. Suprised? What if this is true? Maybe not today, but someday and unfortunately, this isn’t something one can simply joke about. Since the rate at which global warming is increasing, there’s no surprise this could actually happen in the near future. And we, humans, are responsible for all of these environmental effects. But is this the only cause we’re responsible for or are there others?

Let us find out more about the environmental effects in the section below.

As the rate of the population keeps increasing day by day, we move nearer towards global extinction. Since more population means more land and more land means more destruction. Humans are known for their greedy and careless nature. To fulfil their needs they’d go to any extent causing very harmful environmental effects. Humans have till date caused following destruction in nature:

Air Pollution and its effects

The rate of air pollution is increasing by each passing day due to human interference and it’s no surprise that it will now soon hit the peak or already has hit. Air pollution caused by air pollutants have a negative effect on plants as they tend to change the pH levels of the soil, solubilizing toxic salts of metals like Aluminium. Oxides of sulphur and nitrogen are emitted into the atmosphere by combustion of fossil fuels. Later these gases convert into acidic precipitation or rain drop which form acidic rain and infect plants and other forms of vegetation thereby making the food we eat harmful and toxic.

Air pollution is the major cause of the depletion of ozone layer and for many other harmful environmental effects.

One of the major problems caused by air pollution is the depletion of the Ozone layer which has given rise to global warming. Ozone is found in the stratosphere of the atmosphere. The ozone layer protects the earth from the harmful radiations given out by the sun. It absorbs the radiations from the sun thereby preventing it from entering the earth’s atmosphere. Emission of CFCs alongside low temperatures is the major cause of ozone layer depletion.

Other factors responsible for this depletion are hydro-chloro–fluro-carbons (HCFCs) and volatile organic compounds. These compounds maintain themselves as long as they’re in the lower atmosphere but react and breakdown on exposure to UV rays in the stratosphere.  All these factors combined lead to ozone layer depletion. Ozone layer depletion has numerous effects on human health and the environment at the large, such as: 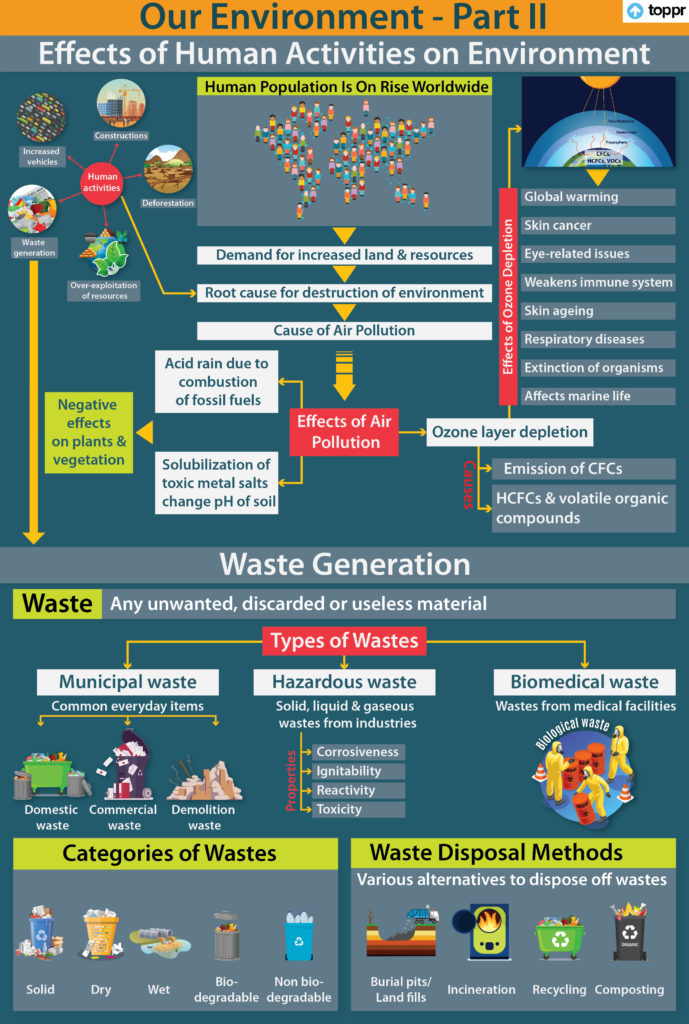 Q. A fish-eating bird species were found to have a specific, heavy metal concentration of 700,000 ppt (parts per trillion). The conclusion based on the data is :

a. Air pollution may have caused this bird species to inhale dangerous amounts of heavy metals while migrating.

b. The entire population of the bird species, from which this sample was taken, died.

c. The population of this bird species exploded, causing an ecosystem imbalance.

d. Pollutants tend to collect in areas of land where this bird species nests.

e. This bird species is at a high trophic level on the food chain.

Sol: e. This bird species is at a high trophic level on the food chain.

I am also a ppt student .Branch Chm and sem 2nd . Please contact me.

Helping me alot with my studies ☺