Almost all the businesses in the world find themselves in the midst of arguments, daily. And is some that are good for the business. Because such arguments generate the passion for the company and towards its mission.

The more the people engage in the arguments regarding the strategy and structure, the better it is for the company. The leaders that want to attain the peak performances from their employees understand that this debates and arguments are bound to happen.

In spite of all the dilemmas and tensions, the leaders know how to resolve the arguments in the best manner. They know how to align the team again for working towards the same target. There is often one choice that these leaders come across: right versus the wrong dilemmas.

The reason for this is when the peak performers in the company debate there is no one right or wrong. They know that these arguments only happen when the right decisions collide. This leads to friction in the group.

Let us say, for example, there is a merger of two companies which is going on. Thus, the two back offices of both the companies are required to be merged. Now, the main decision here is, which office should absorb the other? Because in such cases both the managers of respective companies will argue that they are right.

This type of dilemma in the business world is known as the ‘good for unit v/s good for the whole(company)c’. These types of dilemmas only make the job of the managers tougher.

These dilemmas have been part of the organizations for many years. They are still going to continue only. But there are some measures, which a business leader can take to decrease its effects. 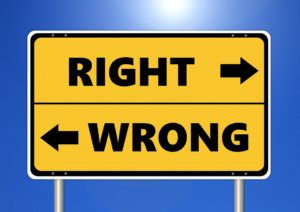 When the performers in the group collide, they start the discussion by proving their points ‘right’. But, gradually the discussion moves towards proving each other wrong. This does not resolve the dilemma. For this, you can try and invite both the groups towards the solution of ‘and’. Here it is becomes

If the above solution is not able to solve the dilemma then think about the right decision. In the right versus the wrong dilemma, go with the option that is more ‘right’. For this, there are three ways which you can use. End based, care based, and rule-based.

Commitment towards the decision

Instead of making the group agree to whatever you say to try and think whether the process that was adopted for making the decision was fair and rational for everybody involved. Were that person that participated in the decision was listened to and treated well? These skills will add value to the company and your vitality will be increased. In this way, you will keep the group moving ahead.

Q. The business ethics in the organization are well accepted on

A. Social values only

B. Moral values only

C. Both of the above

Answer: C. Both of the above