While watching the news you might have noticed the reporter saying that the temperature of a particular city or a country has broken a record. The rainfall of some state or country has set a new bar. How can they know about it? What are the measures that they have taken and studied to say so? These are the time-series data. You all are familiar with time-series data and the various components of the time series. In this section, we will study how to calculate the trend in a set of data by the method of moving average.

A Trend in a Time Series

A time series is broadly classified into three categories of long-term fluctuations, short-term or periodic fluctuations, and random variations. A long-term variation or a trend shows the general tendency of the data to increase or decrease during a long period of time. The variation may be gradual but it is inevitably present.

Suppose you have a time series data. What will you do with it? How can you calculate the effect of each component for the resulting variations in it? The main problems in the analysis of time series are

Measurement of Trend by the Method of Moving Average

This method uses the concept of ironing out the fluctuations of the data by taking the means. It measures the trend by eliminating the changes or the variations by means of a moving average. The simplest of the mean used for the measurement of a trend is the arithmetic means (averages).

The moving average of a period (extent) m is a series of successive averages of m terms at a time. The data set used for calculating the average starts with first, second, third and etc. at a time and m data taken at a time.

Problem: Calculate the 4-yearly and 5-yearly moving averages for the given data of the increase Ii in the population of a city for the 12 years. Make a graphic representation of it. 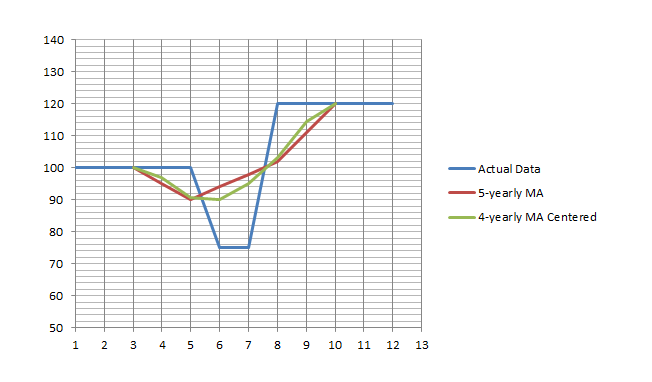