Imagine waking up to a situation where you are left all alone, with no means of Communication? A situation like this seems scary! The basic nature of humans to stay connected with each other has resulted in the modern-day Settlement, Transport and Communication. Let’s see how!

It’s the basic human nature that despite varying interests, people tend to live together. Humans due to the settlement, transport, and communication are regarded as the most social creatures on Earth. Early man was solely dependent on nature for his basic needs of food, shelter and clothing, but as the time paced humans developed their own system of shelter and living.

They learned new skills to become self-sustained. From growing crops to making houses they changed the environment according to their needs. Apart from the settlement, transport, and communication were the developments made by humans in course of living well. During the early man period, humans settled on trees and inside caves. Today they build houses. The places where we build houses are called settlements. River valleys were the first settlements for human dwelling, the reason being their fertile lands and availability of water. As people in that era were mostly dependent on agriculture, they settled in places which would support beneficial farming.

Gradually when people started trading and earning through commercial establishments, they started settling according to their interests of trade and earnings.  With the advent of modern skill in humans, settlement flourished to places other than river valleys. Primarily, settlements can be of following types: 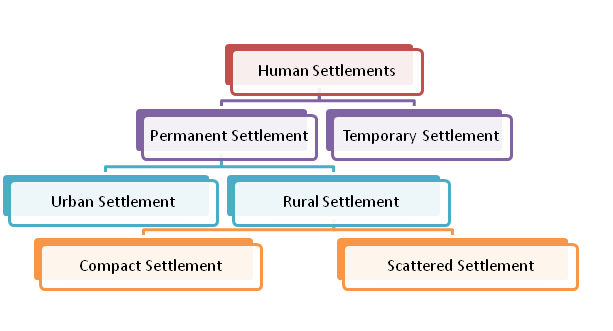 Permanent settlement is the most prevalent settlement today. Since the inhabitants make houses, they do not move to other places for a dwelling.They permanently inhabit here due to various reasons like occupation, trade, and resources.

Settlements in village areas are termed as rural settlements. In rural areas, people prefer occupations like agriculture, forestry, fishing arts and trading etc.  The main occupation of people here is agriculture. The houses built here depend on the environment and region. For example, in heavy rainfall areas houses are built on stilts and have slant roofs while in hot climate areas the houses are roofed by thatched coverings.

Rural settlement can be compact and scattered both. In the Compact settlement, people make a dwelling on flat lands and the houses are very closely built to each other. While in the Scattered settlement, habitats are scattered over extensive areas and are mostly found in hilly and forest areas.

Settlements in cities and towns are called as urban settlements. These are a larger form of settlements and people here are occupied by manufacturing, services and trading kind of occupations. Generally, this settlement has many pucca houses.

Travelling in early days could take months to years. The absence of conveyance in early days made travelling the most arduous of works. Until the invention of the wheel, travelling was a task to do!  With the passage of time, human beings developed different means of transport.

Before the invention of wheels, people used to travel with mules or donkeys to carry items of luggage but after the invention travelling became way more easy and fun. For example, in India, we use Mules, donkeys, Bullock, and camels for carrying luggage.

Did you know that Manali to Leh highway is the highest roadway in the world? Roadways join various cities to one another. With these roads, you can travel from one place to another effortlessly. Roads are present everywhere. From deserts to mountains, they serve as an important means of transportation. Roads like the flyovers and expressways are present above the ground level. Similarly, Subways are underground roads that help manage the growing levels of traffic.

Did you know the railway track of India is the largest in Asia? Railways carry people and heavy goods through long distances. Initially, these used coal and steam. But today trains run with the help of diesel and electricity. Waterways are the most ancient mode of transportation. They are the cheapest way of carrying heavy and bulky goods over long distances. Waterways are of two types: Inland waterways and sea routes.

Inland waterways use reverse and lakes for navigation. Ganga, Brahmaputra, system is the most important Inland Waterways in India. Sea routes or oceanic routes transport goods and merchandise from one country to another. Ports connect these routes for international transaction. Some of the important ports are Singapore, Mumbai, Los Angeles, Rio De Janerio, and Capetown.

These are the fastest way of transportation of the 20th century. Aeroplanes and Helicopters are the best examples of Airways. These help us reach the most distant and remote areas. Aeroplanes generally carry goods and passengers. Some of the most important airports are Delhi, Mumbai, London, New York, Paris etc. 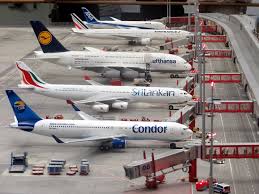 Q: Which type of road is constructed under the ground?

Answer: D) As we mentioned, Subways are roads that are present underground. Like flyovers, subways help to manage growing levels of traffic in large cities.