Well, before starting, I would like to tell you that this ‘degree’ has nothing to do with your thermometer’s degree or to your course completion certification. The term ‘degree’ has come to the important part of Mathematics, i.e., Polynomials and is adding an essential meaning to it. So, let’s hit directly to understand the Degree of Polynomials in details. 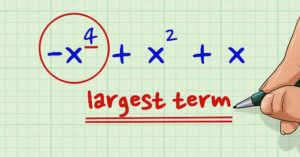 Polynomial in One Variable

Note: Exponents of variables of a polynomial .i.e. degree of polynomials should be whole numbers.

How to find the Degree of a Polynomial?

There are 4 simple steps are present to find the degree of a polynomial:-

Classification Based on the Degree of the Equation

Based on the degree, the equation can be linear, quadratic, cubic, and bi-quadratic, and the list goes on.

Importance of Degree of polynomial

Relation of Degree of Polynomials with Zeroes of Equation

Theorem 1: A polynomial f(x) of the nth degree cannot vanish for more than n values of x unless all its coefficients are zero.

The above table shows possible real zeros /solutions; actual real solutions can be less than the degree of the equation.

Before going to start other sections of Polynomials, try to solve the below-given question.

A Question for You

Question 2: Give example of a degree of polynomial?

Question 3: Explain the degree of polynomial under root 3?

Answer: Under root 3 is a polynomial and its degree is 0. This is because its expression can take place as √3(x^0).

Question 5: Explain what you understand by a third degree polynomial?