Chemical Effects of Electric Current: During rainy seasons you are often told to stay away from the electric poles? Have you ever wondered why is it so? This is because as the water flows continuously, the insulator turns into a conductor. As a result of this electricity can flow through your body. Let us now study the topic chemical effects of electric current in detail. To understand this better, explore the article.

Let us see the conduction of electricity in liquids: 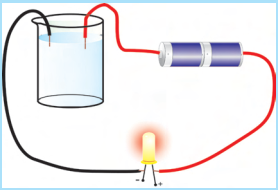 Different solutions or liquids conduct electricity differently. If we talk about the ordinary water, like the water from the tap or the well, these water contains minerals and salts. So these dissolved materials help to conduct them. But in the case of distilled water, there are no salts or minerals dissolved in it. As a result, the current will not flow in this case.

When an electric current is passed through a conducting solution, some chemical reaction takes place in the solution. This is among the chemical effects of electric current. For example, when some current is passed through water, water ionizes into H+ (aq) and OH– (aq) ions, where H+ (aq) ions go towards the cathode to gain electrons and form H2 whereas  OH– (aq) ions go towards the anode to lose electrons and form O2 molecules.

Some of the chemical effects of electric current are as follows :

It is a process in which a layer of one metal is coated with another metal by electrolysis.

Electroplating Process for a Silver Spoon with Gold 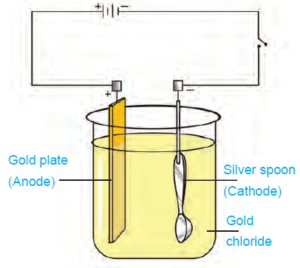 Question 1. The lightning conductor used in building protects the building by :

Solution: B is the correct option. The lightning conductor used in building protects the building by conducting the lighting safety to the ground.

Question 2. Buildings are more susceptible to a lightning strike because

Solution: D is the correct option. Buildings are more susceptible to a lightning strike because of all the above reasons.