Errors in general means something wrong in the work. Nobody can deny the fact that errors are an inescapable part of any work. If they are inescapable, then it becomes the responsibility of the person in charge to avoid or minimize the errors. Hence, it is not only necessary to correct the errors but to prevent them in the future. In accounts also, there are various types of errors which an accountant confronts. There are separate steps to rectify each kind of error. In this article, we will look at the various types of errors.

Types of Errors in Accounting processes 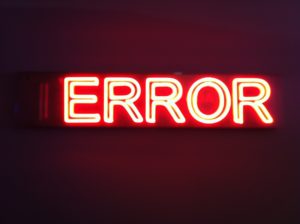 1. On the basis of Effects

This kind of error is known as ‘One-Sided’ because it affects only one account of the books of accounts. There are various reasons which arise such kind of error.

Reasons include posting on the wrong side of the account, duplication of the same amount in an account, etc.

Moreover, wrong casting in the ‘Day Books’ leads to such kind of error. These kinds of errors are easy to detect as it does not allow the Trial Balance to match.

Such kind of error is complex in nature and may affect the trial balance too. Undoubtedly, as the name suggests, it affects two accounts at the same point of time.

Sometimes it affects the accounts in such a manner that the total of the Trial Balance remains the same. For Example, Mr. X’s account credited instead of Mr. Y account for an amount received from Mr. Y.

On the other hand, it affects the accounts in a manner that the total of the Trial Balance changes (though matches). For Example, Mr. X’s account debited instead of Mr. Y account being credited for an amount received from Mr. Y.

Learn more about the Process of Rectification of Errors here in detail.

There are certain errors which affect more than two books of accounts at the same time. Though there are very fewer instances of such kind of errors in practical life.

2. On the basis of Nature

(a) Error of Omission

Omission means forgetting to post something. In accounting also there are instances where the accountant omits to post some entries either completely or partially.

Example of Partial Omission:  a transaction may be recorded in subsidiary book omitted to be posted to ledger accounts.

Example of Complete Omission: if the accountant omits to post a transaction in any of the books of accounts.

(b) Error of Commission

Here, in such kind of errors, the balance of Trial Balance does not match until the double effect takes place. For Example, A credit sale of goods for Rs.7,500 to Mr. Rahul was debited to Mr. Satish’s account.

Nobody can deny the fact that the Accounting Principles are of great help to the accountants. But there are certain chances where these principles can lead to errors.

Such types of errors related to the incorrect usage of the accounting principles. There are 2 main classifications of both income and expenditure, i.e., Revenue and Capital.

The accountant needs to know the difference between both the items and their respective treatment properly. For example, sales of an asset may be recorded through the Sales day book instead of debiting the Asset account.

On the other hand, wages for the installation of an asset may be debited to the wages account instead of debiting the asset account.

Solved Question on Types of Errors

Question: What do you mean by ‘Compensating Errors’? Give an Example.

Answer: Compensating errors are those errors that affect both the debit and credit sides of the ledgers with equal amounts, nullifying the overall impact. Hence, the Trial Balance will always be in an agreement under the case of Compensating Errors. For Example, the Overcasting of both the purchase and the sales books of accounts with Rs.10000 could be done.