Dices test and cubes test hold a very special place in reasoning ability because these questions rely mainly on your intellectual and visualizing capacity. It is important that you have enough practice and experience of these questions beforehand. We will help you with some of the concepts, tricks, and understanding of dices test questions.

Before knowing about Dices Test let’s know some basics about dice. There are generally two types of dice, open and base dice. Base dice further divide into two types, standard and ordinary dice. When the numbers in the two dice do not match each other they are called a standard dice. While if one or more than one number matches between two dice than it is called ordinary dice. 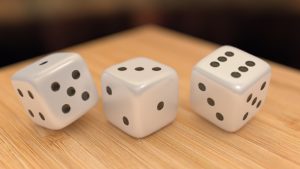 To solve dices test questions it is important that you learn some rules first. Here are some of the important rules that can help you during the exams:

When you open the dice this is how it will look like: 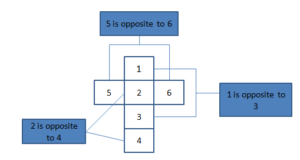 Some of the rules related to the open dices based on the above figure are:

– 1 and 3 do not touch each other so they are in the opposite direction.

– Similarly, surfaces of 2 and 4 also do not touch each other and therefore they are also in opposite direction.

Now we will provide you with some of the solved examples so you can have a better understanding of the topic.

Q 1. In the figures below four different dices are shown. When the dice is as shown in the figure than what must be the value at the bottom face of the dice?

Q 2. If in the below figures the total value of the opposite value is always seven than which figure is the correct one?

Q 3. Which number in the below figures will be opposite to the number 6?

Q 1. Given in the figure are two dices. When two dots are at the bottom, how many dots will be at the top? (10)

Q 2. The position of two dices is shown in the figure. If one dot is at the bottom than how many dots will be at the top of the dice?

Q 3. In the below figure, four dices are positioned. What will be the opposite face of the one that has 3 dots?

Q 4. Based on the position of alphabets in the cube, what letter will be the opposite of A?