Do you ever wonder how the amoeba eats its food even though it does not have a mouth? It has several finger-like projections called pseudopodia that help it take in the food. Let’s know more about this interesting mode of nutrition. First, a little bit more about this tiny creature.

Amoeba is a microscopic unicellular organism. It mostly resides in places like pond water. It’s structure consists of the following basic components:

Fun fact: With the help of pseudopodia, this unicellular organism can not only change its size and shape but also capture its food!

Feeding And Digestion In Amoeba

Amoeba possesses a holozoic mode of nutrition and process is known as  “phagocytosis”. The basic processes involved in the nutrition  include: 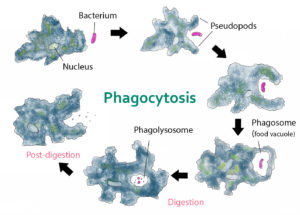 Now, keeping in mind you have understood about how the amoeba feeds on its food and absorbs it, let’s test our knowledge on this topic.

Q1. What is the process of obtaining food in amoeba called?

Ans: Phagocytosis is the process by which the amoeba obtains its food.

Q2. What are the finger-like projections present in amoeba called?

Ans: The finger-like projections are called “pseudopodia“. They not only help in engulfing food molecules but also help the organism in movement.

Share with friends
Previous
Digestion in Ruminants
Next
Nutrition in Animals