We take our ability to breathe and our lungs for granted. But, did you know that respiratory diseases are leading causes of death around the world? Diseases such as bronchitis, asthma, tuberculosis etc, are on the rise worldwide. The rising level of pollution is one of the major reasons for this. Let’s try to learn what are some of the common respiratory diseases and how it affects people.

Asthma is a condition where a person finds it difficult to breathe due to inflammation of the bronchi and bronchioles. Common symptoms of asthma are wheezing, dry cough and shortness of breath. Multiple factors such as infection, pollution, allergic reactions etc. can trigger an asthmatic attack. Usually, asthma starts in childhood and carries on into adulthood. However, some people in their 60s or 70s can develop asthma. This is adult-onset asthma. 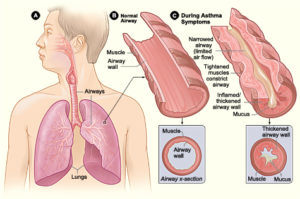 Chronic Obstructive Pulmonary Disease (COPD) is a term that describes multiple respiratory diseases that cause breathlessness or affect normal exhalation. It is a serious disease where the symptoms include coughing up sputum (mucus from the lungs) and shortness of breath. COPD can be tricky to diagnose because it can develop without any visible symptoms for a long time or the symptoms can be mistaken for the normal process of ageing. Cigarette smoking is one of the major causes of COPD.

Chronic bronchitis is a form of COPD characterized by chronic coughing. Patients usually cough up sputum in the morning. Acute bronchitis, on the other hand, is not a long-term disease but is due to a viral or bacterial infection. Therefore, it is treatable with antibiotics and the symptoms subside once the infection is gone. 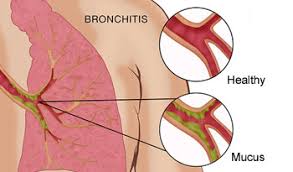 It is another form of COPD and is a serious respiratory problem. Cigarette smoking is a major cause which damages the alveolar walls thereby, decreasing the respiratory surface. It develops slowly over the years. Patients with emphysema have trouble exhaling air from their lungs. In extreme cases, there is respiratory failure and the need for extra oxygen to help with breathing. 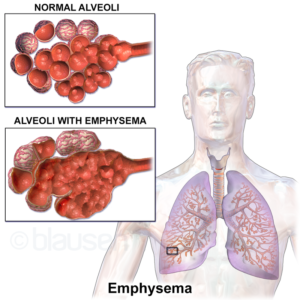 The bacterium Mycobacterium tuberculosis usually causes this infectious disease. Tuberculosis (TB) usually affects the lungs, but it can also affect other body parts. It spreads through the air when people with active TB sneeze, cough, speak or spit. Most TB infections are symptomless and are called latent tuberculosis. 10% of these infections progress to active disease, which if not treated, can be fatal. Typical symptoms of TB include chronic cough with blood in the sputum, weight loss, fever and night sweats. 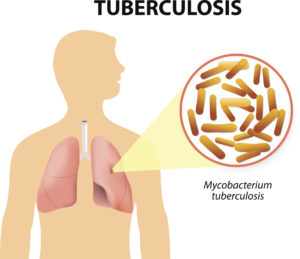 These are disorders due to the working conditions of a certain occupation. In industries that involve stone-breaking or grinding, a lot of dust is generated which the body’s defence system cannot handle. Prolonged exposure to this dust causes inflammation leading to fibrosis (excess fibrous tissue) that results in serious lung damage. Workers in these industries can prevent this by wearing protective masks.

Other major respiratory diseases involve pneumonia, cystic fibrosis, and lung cancer. Therefore, some measures that we can take to reduce the occurrence of these diseases are to stop smoking and reduce environmental pollution.

Q: Which of the following respiratory diseases is not due to a viral/bacterial infection?

Solution: The answer is ‘b’. Cigarette smoke is the major trigger of emphysema.