What happens when our body does not get enough oxygen? We feel breathless, tired, uneasy and can even become unconscious in extreme cases! Why do you think this happens? This is because oxygen is extremely important for producing energy. The respiratory organs are responsible for this process. Let’s study about these essential organs in our body.

Different animals have different respiratory organs based on their habitat and body organization. Invertebrates like sponges and flatworms breathe through simple diffusion over their body surface. Earthworms use their cuticle while insects use a network of tubes. Most aquatic animals use specialized structures called ‘gills’ whereas most terrestrial creatures use structures called ‘lungs’.

Did you know that frogs can breathe through their moist skin too? Among vertebrate animals, fishes breathe through gills; while birds, reptiles, and mammals use lungs to breathe. Mammals respire using a well developed respiratory system. Let’s learn about the human respiratory organs in more detail.

Browse more Topics under Breathing And Exchange Of Gases

The human respiratory system has the following parts: 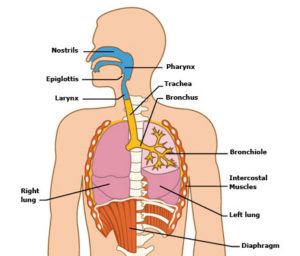 Parts of the human respiratory system.

This network consisting of bronchi, bronchioles, and alveoli forms the lung. Let’s learn in more detail about the lungs. In our body, the lungs are situated in an air-tight chamber called the thoracic chamber. This chamber consists of the vertebral column at the back, sternum in the front, ribs on the sides and diaphragm on the lower side. This setup of the lungs is such that any change in the volume of the thoracic cavity will affect the lung cavity. This is very important for respiration.

Functions of the Respiratory Organs

In terms of function, the respiratory system has the following two parts:

1) Conducting part – This is the part from the nostrils to the terminal bronchioles. The conducting part has the following functions –

2) Respiratory/Exchange part – This part includes the alveoli and their ducts. Here, actual diffusion of oxygen and carbon dioxide between blood and atmospheric air happens.

Q: The deficiency of which of the following factors causes ‘Hypoxia’?

Solution: The answer is ‘a’. Hypoxia is a condition where the body or a part of the body does not get enough oxygen supply.