Have you wondered why food spoils if left unrefrigerated for days? Or how you get cheese from milk? These are all due to the action of living organisms that are not visible to the naked eye, called microbes or microorganisms. These microbes also have some very important applications in our lives. Along with plants and animals, microorganisms also form an important part of the biological system on earth. Let’s learn about them in more detail.

Microbes exist everywhere – in soil, air, water and also in the human body and the bodies of plants and other animals! They also exist in places where no other life-form exists, such as deep in the geysers where the temperature is extremely high! Bacteria, fungi, protozoa, viroids are all microorganisms. Although microscopic, they can grow on nutritive media and form colonies visible to the naked eye. This allows us to study them better. So far, we have learnt that microorganisms cause diseases in humans, plants and animals. However, they can also be useful to man in several ways. Let’s take a look at the different ways in which they are useful to us.

You must have seen people add a small amount of curd to fresh milk. In time, this milk at suitable temperature then turns into curd! How does this happen? This is due to the action of microorganisms called Lactic Acid Bacteria (LAB).

The small amount of curd added as a starter culture to milk contains millions of these bacteria, which multiply at suitable temperatures turning milk into curd. LAB also improve the nutritional value of milk by increasing vitamin B12. They also play a significant role in keeping a check on disease-causing microbes in our gut.

Other uses of microorganisms in our household products include the dough used to make idli or dosa. Similarly, the dough used to make bread is fermented using baker’s yeast (Saccharomyces cerevisiae). The process of fermentation produces CO2 which gives the bread the puffed-up appearance. Toddy (a drink in southern India) is also the result of microbial activity on sap from palms.

Other uses involve fermentation of fish, bamboo-shoots and soybean. Another product made using microorganisms is cheese. For example, the large holes seen in ‘Swiss cheese’ is due to the amount of CO2 produced by the bacterium Propionibacterium sharmanii.

Industries also use microbes to make products of value to humans. Since products are made on a large-scale in industries, microorganisms are also grown in bulk in large tanks called ‘fermentors’. 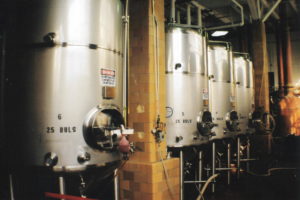 Industries use microbes to make the following products:

The baker’s yeast that is used to make bread, is also used to ferment malted cereals and fruit juices to make beverages such as beer, whiskey, wine, brandy etc. The raw material used and the type of processing (distillation or no distillation) gives rise to different alcoholic drinks. For example, processing without distillation produces wine and beer, whereas distillation of fermented broth produces whisky and brandy.

‘Anti’ means against and ‘bio’ means life. Microbes produce chemicals that can kill or stop the growth of disease-causing organisms. These are antibiotics. The discovery of antibiotics in the twentieth century was very important to human health.

The scientist Alexander Fleming accidentally discovered the first antibiotic – Penicillin. During World War II, Penicillin was extensively used to treat wounded American soldiers. Deadly diseases such as plague, whooping cough, diphtheria which claimed many lives in the past, are now treatable because of antibiotics.

The detergents used to remove oily stains contain enzymes such as lipases derived from microbes. Another microbe ‘Streptococcus’ produces Streptokinase that helps to remove blood clots in patients suffering a heart attack.

Microbes (Trichoderma polysporum) also produce bioactive molecules like cyclosporin A. They are used to suppress the immune system during organ transplant procedures. Microbes such as Monascus purpureus produce statins which help to lower blood cholesterol levels.

Have you ever wondered what happens to the large amount of sewage (wastewater) humans generate every day? It is treated in Sewage Treatment Plants (STPs) to make it less harmful before releasing into natural water bodies. The microbes present in the sewage itself help in the treatment. It involves the following two stages:

This step involves the removal of large and small particles from sewage. First, a process called ‘sequential filtration’ removes the floating debris. Then the process of ‘sedimentation’ removes soil and small pebbles. The solid material that settles is ‘primary sludge’ while the supernatant forms the ‘effluent’. The effluent is then passed through secondary treatment.

It involves the following steps:

Although urbanisation has increased, the number of sewage treatment plants have not. This has led to the release of untreated sewage into rivers, resulting in their pollution and increase in diseases! Therefore, the Ministry of Environment and Forests has started the Yamuna Action Plan and the Ganga Action Plan to save these rivers from pollution.

Microbial activity produces a mixture of gases (mostly methane). This is biogas and is used as fuel. Different microbes give rise to different gases based on the substrates they use. Anaerobic bacteria feed on cellulose and generate large amounts of methane along with CO2 and H2.  These bacteria are ‘methanogens’. Methanobacterium, found in the anaerobic sludge (mentioned above) is a common example.

Cattle dung is also rich in these bacteria because they help break down cellulose in the rumen of cattle. Therefore, cattle dung is commonly used to generate biogas. Biogas plants are more common in rural areas because cattle dung is available in large quantities in villages. The Indian Agricultural Research Institute (IARI) and the Khadi and Village Industries Commission (KVIC) developed the technology of biogas production in India.

A typical biogas plant has the following parts: Using pesticides and insecticides not only kills harmful pests but also gets rid of beneficial life forms. Therefore, farmers are now turning to the use of biological methods to control pests and plant diseases. This use of biological methods is ‘Biocontrol’. An example of a microbial biocontrol agent is the bacteria Bacillus thuringiensis that is toxic to butterfly caterpillars but does not harm other insects.

Lately, through genetic engineering scientists have introduced toxin genes from this bacteria into plants, making them resistant to attack by pests. Example: Bt-cotton. Another biocontrol agent developed to treat plant diseases is the fungus Trichoderma. Baculoviruses are also excellent biocontrol agents because they attack harmful pests without negatively impacting plants and beneficial insects.

Question: Which of these BOD levels represents the most pollution?

Share with friends
Previous
Axioms, Conjectures and Theorems
Next
Nutrition In Animals